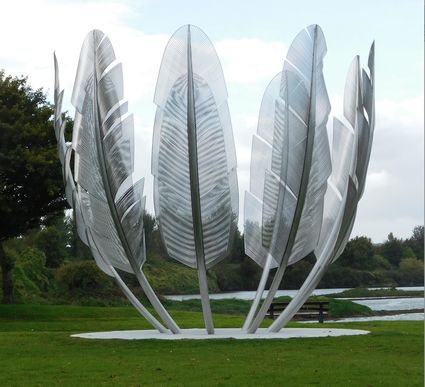 The "Kindred Spirits" sculpture in Midleton, Ireland, that was created by Irish artist Alex Pentek and dedicated in 2017 as a tribute to the $170 the Choctaw Nation made to the starving Irish during their famine in the 1800s.

WINDOW ROCK, Ariz.-Recently, people of Ireland donated a substantial amount of the $3.6 million raised to help 4,300 Hopi and Navajo, in what some people consider a payback for a good deed performed by the Choctaw Nation in 1847.

In 1831, people of what is now the Choctaw Nation of Oklahoma were pushed onto the trail of tears, removed from their homeland, forced to the Indian Territory. At least 4,000 Native Americans died by disease, starvation, and severe weather in the process of moving and resettling. For years they struggled to learn to find food and take care of their families in thi...