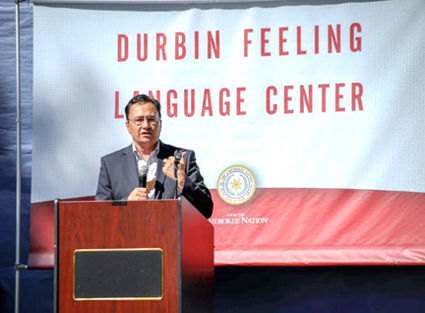 "Now is the time to be bold and act quickly so we do not fail the legacy of our ancestors or future of our Cherokee speakers," Chief Hoskin said. "We have focused on health care and economic development, and we have seen immeasurable achievements, but now we must also focus on saving our Cherokee language as another high priority."

• Create a Secretary of Language, Culture and Community cabinet-level position under administration.

• Invest an additional $5 million from Cherokee Nation Businesses' dividends to renovate and expand the language center.

• Invest another $1.5 million per year for five years from CNB dividends for language program operations, with an option to reauthorize for additional years.

• The Durbin Feeling Language Center will house the Cherokee Immersion Charter School, Cherokee Language Master Apprentice Program and the tribe's team of Cherokee translators together in the center.

The Cherokee Nation currently has about 2,000 identified first-language Cherokee speakers. 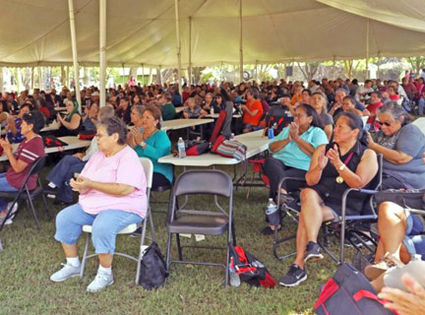 More than 500 first-language Cherokee speakers attended the Celebration of Cherokee Speakers at the Cherokee Heritage.

"The Council of the Cherokee Nation has always been a supporter of every effort to preserve the Cherokee language, and we all look forward to seeing our language carried on to the next generation.""

Feeling, whom the center is named after, is the leading Cherokee linguist who wrote the Cherokee dictionary and is the single largest contributor to the Cherokee language since Sequoyah. He has worked at the Cherokee Nation since 1976.

The Council of the Cherokee Nation passed the Durbin Feeling Cherokee Language Preservation Act in committee in October and is expected to pass the full council.