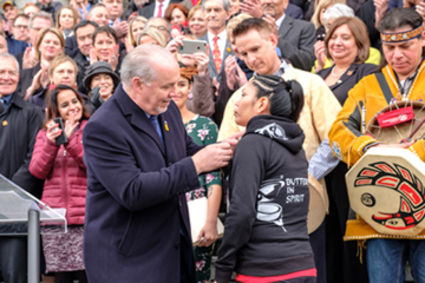 Premier John Horgan joined Moose Hide Campaign officials to hand out the one millionth moose hide pin, representing one million people standing together to end violence against women and children.

Now in its eighth year, the Moose Hide Campaign is a B.C.-born, grassroots campaign to encourage men to stand up and address violence.

"Our government is proud to be part of the Moose Hide Campaign. As men and allies, we need to speak out and be vigilant to make sure our actions and our words do not perpetuate a culture of violence," said Premier Horgan. "To know that one million people are standing together to end violence against women and children gives us hope that change, and a better future for women and girls, is possible."

"It's not enough to say that violence against women and children is unacceptable-words have to be followed by actions," said Scott Fraser, Minister of Indigenous Relations and Reconciliation. "These actions are a shared responsibility, and by standing with grassroots movements like the Moose Hide Campaign, we can help address the many social concerns facing our communities around the province."

The event included men from throughout the province gathering in Victoria for a day of finding solutions to end violence. Regional events also took place in Kamloops and Prince George.

"Indigenous women are three times more likely to suffer domestic abuse than non-Indigenous women. Violence in any form is not acceptable, and it's an issue we're determined to address," said Mike Farnworth, B.C.'s Minister of Public Safety and Solicitor General.

Members of the B.C. public service and the legislature showed their support by taking part in a fast, which is an integral part of the campaign's focus and is a show of sacrifice to demonstrate empathy with women who endure violence.

"It is our hope and belief that the Moose Hide Campaign is having a real and positive impact in the lives of women and children across Canada, and that it is also resulting in healing and behavior change amongst men and boys," said Paul Lacerte, co-founder and CEO of the Moose Hide Campaign. "We have reached our goal of one million moose hide squares. Now let us begin the journey towards 10 million."

Since it began in 2011, the Moose Hide Campaign has grown into a Canada-wide movement. The campaign has widened its scope to embrace other anti-violence efforts, such as the Ten Men Challenge, designed to engage young men in conversations about violence, and the Safe Space, Safe Place program, aimed at ending violence against women on university campuses.