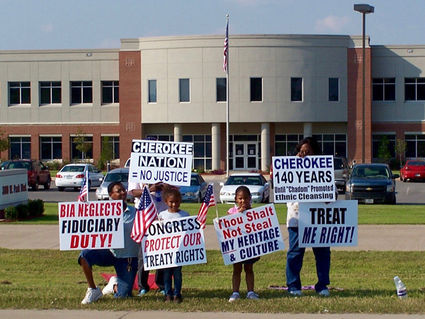 Freedmen descendants protest outside a Bureau of Indian Affairs office in Muskogee, Oklahoma, in 2008.

MUSKOGEE, OK-The descendants of former slaves held within the Cherokee Nation are entitled to tribal citizenship, a federal judge ruled in a long-running controversy that has stretched through three U.S. presidential administrations.

In the landmark decision, Judge Thomas F. Hogan settled the biggest issue in the dispute. He said a treaty signed in 1866 guarantees citizenship to the former slaves-more commonly known as Freedmen-and, by extension, to their descendants.

"The history, negotiations, and practical construction of the 1866 treaty suggest no other result," Hogan wrote in...