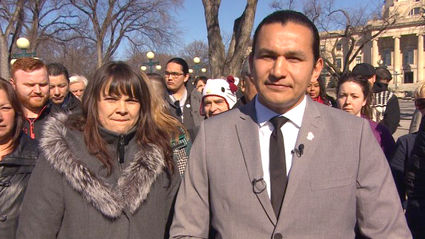 WINNIPEG, MB-Member of the Legislature (MLA) Wab Kinew has thrown his hat in the ring to become the leader of the Manitoba New Democratic Party (NDP). Joined by family, friends, and supporters at the Manitoba Legislature, Kinew announced he's a candidate for the NDP leadership.

Kinew said he's running "for people whose voices aren't often heard" and he gave the example of an inmate at the Manitoba Youth Centre. "I want to say directly to that young person, 'I am you, and you change your life for the better,'" Kinew stated.

Speaking at a low-key gathering beneath the statue of Lo...