When people desire security over liberty 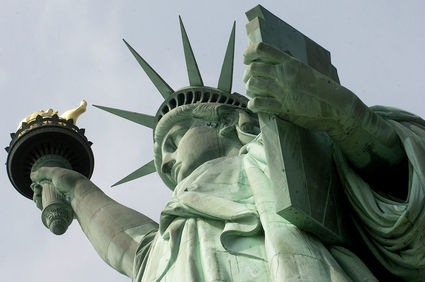 The Statue of Liberty is a symbol of freedom and liberty known around the world. With recent changes for immigrants and social and religious groups, some wonder if with more restrictions and security our freedoms aren't compromised.

I've heard a lot of talk about safety and security lately. When it comes to the security of our homeland, I think of the poster that can be found at powwows, rodeos, and Native festivals. It shows a historical photo of Apache warrior Geronimo and his fellow warriors with the text "Homeland Security since 1492".

I'm sure if Geronimo were alive today, he'd have a solution.

Presidents or prime ministers are not some kind of supreme ruler or king, unless they are dictators or tyrants. While it may be part of the president or prime minister's job to keep us safe, it's not his primary responsibility.

The primary responsibility of the president and the federal government, is to protect our liberty. The primary job of the government is to uphold and defend the Constitution, which itself is supposed to limit an ever power-hungry government.

Liberty is dangerous. It's just a fact of life. It means risk. We can't have true freedom and liberty without some level of danger. The only way to remove all risk or danger in a society is to completely imprison and bind all citizens in restrictive rules and regulations.

By nature, the only thing a government will ever do willingly is impose restrictions on its citizens. Governments are like greedy, disobedient children. There are no exceptions. They derive their power from the consent of the governed, but if we give them an inch, they'll take a mile.

If we begin talking about making laws and enforcing extraordinary measures aimed at "keeping us safe" we always must take the implications one step further. We always must look past the immediate and supposedly "impending" dangers that loom in everyone's mind and ask ourselves "how could this be used against innocent, law-abiding citizens."

If we allow them to invade the privacy of some citizens, they will inevitably invade the privacy of all citizens. If we ask them to keep us safe by monitoring certain individuals, they will happily oblige, but we will all be subjected to the same kind of surveillance and scrutiny as those we fear. The pursuit of security will lead to nothing but oppression. When people clamor for more security they are clamoring for their own oppression and enslavement. The record of history bears this out every time.

There is never any excuse to pass laws or enforce measures, whether we're at war or not, which could be used against innocent, law-abiding citizens. There's never any excuse to beseech the government to tie down its citizens with chains of fear. It's short-sighted to only think of an immediate solution to a problem that has taken years to come to fruition. 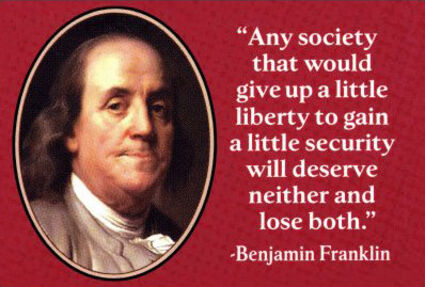 Without the perseverance of American founding father Benjamin Franklin, Americans would not have the constitutional rights and freedoms we have.

Certainly, the issue at hand may require immediate action, but usually there's an underlying cause that provoked or allowed for the current situation. There is a reason we live in dangerous times, and it's not because we are "hated for our many liberties." It's because of a reckless and authoritarian foreign policy.

Our liberties were paid for with precious blood. They were hard fought for and gained inch by inch, but it takes only an instant for them to disappear. Be certain of this, our liberties will quickly disappear if fear and the desire for security are given precedence to dangerous liberty.

A great advocate and defender of liberty, American patriot Patrick Henry, ought to be well remembered for his impassioned proclamation-"Is life so dear, or peace so sweet, as to be purchased at the price of chains and slavery? Forbid it, Almighty God! I know not what course others may take; but as for me, give me liberty or give me death!"

Henry understood, perhaps better than anyone alive today, the true cost of liberty and the true price of security.