Chickasaw Veterans Pay Respects at the Tomb of the Unknowns 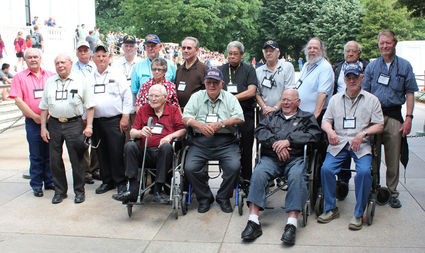 Chickasaw veterans gather for group photo following laying a wreath at the Tomb of the Unknown Soldier in Arlington National Cemetery. "I know of nothing that would be any more significant in my life than to participate in the laying of the wreath on the Tomb of the Unknowns," Joe Orr said. Percentage wise, more Native Americans and Canadians have served in the military than any other ethnic group.

WASHINGTON, DC-Hundreds of visitors stood in still silence at the Tomb of the Unknowns in Arlington National Cemetery on a cool, overcast day as three Chickasaw veterans stepped out to lay a wreath at the tomb. Marked by the words "Here rests in honored glory an American soldier known but to God," the tomb has become a significant place to honor all those who have died in service to their country.

Jerry Tyson of San Antonio, Joe Orr of Frederick, Oklahoma and Johnny Swinney of Ranger, Texas agreed it was a "great honor" to be chosen to pay their respects to all those who have made the...