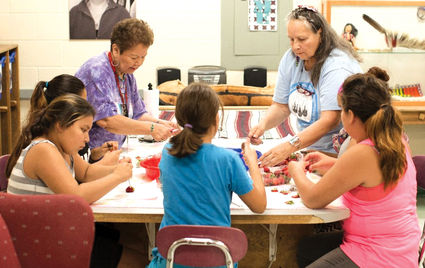 The Lac du Flambeau Band of Lake Superior Chippewa and the Menominee Nation were selected for the Culture of Health Prize. Here tribal grandmas show young kids how to live healthier lives.

The Lac du Flambeau Band of Lake Superior Chippewa and the Menominee Nation were selected for the Culture of Health Prize. They will each receive $25,000 in recognition of their efforts to promote longer, healthier and more productive lives in their communities.

"This year's RWJF Culture of Health Prize winners are inspiring examples of communities that are weaving health into everything they do," President and CEO Risa Lavizzo-Mourey said in a press release.

Representatives of both tribes went to Princeton, New Jersey, to participate in the awards ceremony and to share their stories with other winning communities. They were among eight winners of the prize.

"Being recognized by the Robert Wood Johnson Foundation means the Lac du Flambeau community can continue to walk in a good way and be proud of coming together on another successful project," Brian Jackson, an adviser for the Cultural Connections program at the Lac du Flambeau Public School, said in a press release, "In turn, we can be seen on a bigger stage, from a national perspective across not only Indian Country, but the nation as a whole."

The tribe and the school are sharing in the award. The community is focusing on inter-generational learning, bringing elders and youth together, and is improving health and housing opportunities on the reservation.

The Menominee Nation was selected for its unique approach to addressing historical and modern trauma. By incorporating culture in treatment, the Menominee Tribal Clinic and the Menominee Indian High School have seen improvements in academic achievement and health outcomes.

"When we took the usual way of approaching behavioral and other issues, we realized what we were doing was wrong," superintendent Wendell Waukau said on the Robert Wood Foundation Website. "Our policies were pushing kids out the door."

Before the tribe started its efforts, fewer than 60 percent of students finished high school. Now, the graduation rate is nearly 99 percent.

"That tells us our kids are resilient," Waukau said. "It tells us they're healthy."