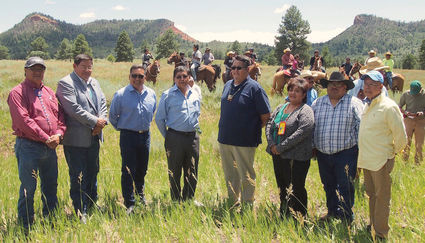 Leaders from the Cochiti, Hopi, Navajo, Ute Mountain Ute, Ute and Zuni tribes meet in Utah, calling on the federal government to create an area in Utah as a national monument.

BEARS EARS, UT-More than two dozen tribes are calling on President Barack Obama to designate a new national monument to protect 1.9 million acres of sacred and historic land in Utah.

New designations are controversial among Republicans but tribal leaders hope that strong support from Indian Country will help make the case for the Bears Ears National Monument. They will also settle for the creation of a conservation area in the southeastern portion of the state.

"We've never been given the opportunity to speak on behalf of our sacred sites on public lands," said Alfred Lomahquahu,...