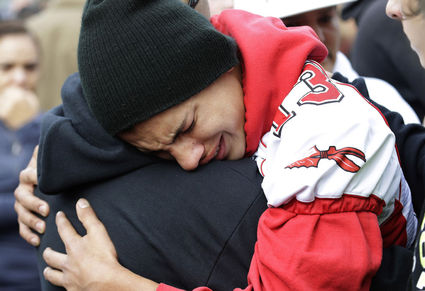 Tribal members came together on Sunday, October 26 for a vigil for the victims and their families. Chairman Herman Williams said the local community will remain united as the healing process begins.

MARYVILLE, WA-Leaders and members of the Tulalip Tribes of Washington expressed shock following a fatal shooting at a local public school that left three young people dead and three others injured.

News reports identified the shooter as a 14-year-old tribal member who took his life after opening fire at the Marysville-Pilchuck High School on October 24. Two teen students were killed while three others-including two more tribal members-remained in the hospital in critical condition.

"It's just so devastating," Deborah Parker, a tribal council member, told The Seattle Times. "We just don't know how it all adds up."

Tribal members came together on Sunday, October 26 for a vigil for the victims and their families. Chairman Herman Williams said the local community will remain united as the healing process begins.

"As we grieve in the wake of this tragedy, the Tulalip Tribes and the City of Marysville stand together, united in sorrow but determined to bring healing to our communities," Williams said in a press release. "The strong working relationship we have built over many years has proven critical as we continue to respond to this unimaginable event. Our priority is now on our children and young people."

Condolences also poured in from Indian Country. Brian Cloodosby, the chairman of the Swinomish Tribe reached out to his fellow tribe in Washington.

"As a father and grandfather, my thoughts and prayers are with my Tulalip relatives," said Brian Cloodosby, who also serves as president of the National Congress of American Indians. "All of Indian Country is holding the Tulalip community in our thoughts and prayers."

NCAI's executive leaders, who were in Atlanta, Georgia, for the NCAI's annual convention, also offered a statement in the wake of the tragedy. It follows:

"We are deeply saddened by the tragedy that occurred at Marysville-Pilchuck High School on Friday. Our thoughts and prayers are with the families of the victims, the students of Marysville School District, and the Tulalip tribes.

It is at times like these that Native communities from all across Indian Country come together in support of each other. As Native peoples, we recognize that every youth is sacred. Each of the young people involved in this tragedy represent a loss to the Tulalip tribes and Indian Country-they were sons, daughters, friends, and future leaders of their communities.

Unfortunately, acts of violence in schools are occurring more frequently across the country and Native communities are not immune to inexplicable acts that leave their communities forever changed.

NCAI stands with all those who are grieving at this time-Native and non-Native. We are all mourning loss and by coming together we will be strengthened by our resolve, our hope, and our prayers. We will work closely with the Tulalip tribe and the surrounding community in any way we can to understand and address this horrible tragedy."