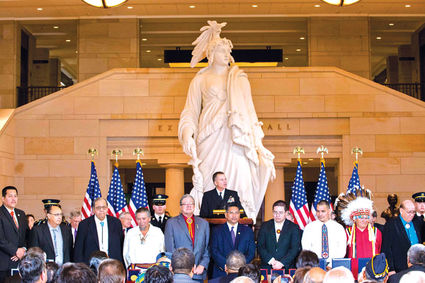 Caleb Smith, Office of the Speaker of the House

Representatives of Native American tribes are honored at a Congressional Gold Medal ceremony on November 20, 2013, honoring Indian code talkers who used their unique languages to communicate secretly and help the United States win World War II. This photo was taken in the Capitol building in Washington.

WASHINGTON, DC-In a ceremony at the U.S. Capitol on November 20, Congress bestowed its highest honor on 33 tribes whose languages helped the United States defeat its enemies.

The Code Talkers developed and transmitted unbreakable codes during World War I and World War II. Their participation remained a secret for decades even as their own government carried out policies that attempted to stamp out their languages, ancestry and tribal nations.

That changed with the Code Talkers Recognition Act of 2008. The law authorized the Congressional Gold Medal for the 33 tribes, with each medal featu...