Gladys Wigden, First Lady in ministry to the Florida Seminoles, walks on at 95 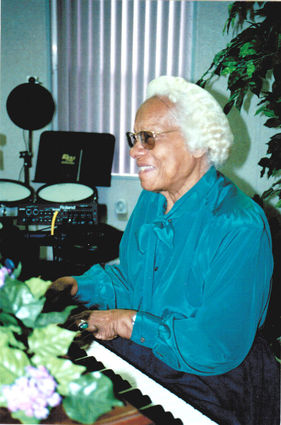 As a singer and self-taught pianist, Gladys began her music ministry traveling the road with her brothers Lawrence, Robert and David as the Wigden Quartet from 1936 to1954. They traveled and sang in churches, held city-wide campaigns and Bible conferences throughout the United States. Gladys loved to sing and play the piano.

She was a familiar figure on the Florida Seminole Indian Reservations for 35 years, and along with her missionary friend, H. Pepper Harris, served as teacher, mentor, and evangelist.

The only girl among five brothers, Gladys Adele Wigden was born to Jehiel and May Bryant Wigden on April 5, 1917 in Naples, New York. Several other momentous events heralded the arrival of this unique woman whose life would spiritually impact many; and as if prophetic, one had to do with Native Americans.

Gladys was born under President Woodrow Wilson’s administration. The United States entered World War I that year and for a time, was fighting a losing battle against the German Army.

During the 1918 Meuse-Argonne Campaign toward the end of the war, German spies continued to intercept telephone calls, decipher codes and capture messenger runners between camps to learn locations of U.S. troops and supplies. The country was greatly in need of a hero. It found one in U.S. Captain Lawrence and a group of Choctaw Indian soldiers!

When Lawrence overheard two of them chatting in their own language, it sparked an idea: all Indigenous tongues were complex, and spoken by only a few, so why not use them as code?

He quickly located and employed the Choctaws, and the plan proved to be the only code the enemy was unable to decipher. Within 72 hours, the Germans retreated and the Allied forces went on the offensive to win the war.

Gladys graduated from Franklin Academy in Prattsburg, New York. She came to know Jesus as her Savior on October 13, 1938, and would walk the Jesus Way for the remainder of her long and amazing life.

As a singer and self-taught pianist, she began her music ministry traveling the road with brothers Lawrence, Robert and David as the Wigden Quartet from 1936 to 1954. They traveled and sang in churches, held city-wide campaigns and Bible conferences throughout the United States, preached the salvation message and operated the Naples Gospel Tabernacle.

David left the group after twelve years, but the group continued to perform as the Wigden Trio. When Lawrence died approximately ten years later, Gladys and Robert sang and played for an additional ten years.

With spreading the gospel always in mind, in 1956, Gladys attended a Bible training school. From 1957-1958, she attended the Costa Rican Language School where she learned Spanish with the original intent to serve that population. But divine circumstances would soon steer her ministry in a different direction.

During her years of travel, she met several Native American gospel singing groups, including the original Antone Family singers and the Claus Family. She also kept in contact with H. Pepper Harris, a long-time friend, who had attended Pine Brook Bible College with her in Pine Brook, New York, and whom she had known since 1945.

By the mid-1960s, Robert, the last of her brothers had walked on and there were none left to travel with her to continue the music ministry. It was one of the most difficult times in Gladys’ life; but earlier contacts she had made would serve her well and enable her to minister as a Christian worker, servant and missionary for an additional 35 years.

After the deaths of her brothers, the Antones invited her to join their music ministry and informed her of the great need for missionaries among Florida’s Seminole Indians. Gladys prayerfully considered the need and felt called to serve.

During one of their singing engagements at the Mekusukey Baptist Church on the Brighton (Florida) Seminole Reservation, the Antones introduced her to other Native Christians, and that would set her ministry on a path that stretched across decades.

Seminole Tribal citizen Sally Billie remembers Gladys Wigden as one who prayed for her and helped her to grow in the Lord, even before the present Chickee Independent Baptist Church on the Hollywood (Florida) Reservation existed.

“Gladys was here when we met under trees, and then under a chickee. She was here with us before the building that we have now was built,” she says.

Judy Baker, a Seminole tribal citizen, also remembers Gladys during her early tribal ministry. “Back in 1967 when she came, I was living in Brighton. A lot of missionaries came in those days, but they never stayed long.”

A long-standing member of Chickee Independent Baptist Church and one of its co-founders, Baker now laughs when she remembers a particular conversation with Wigden: “When I first met her, I asked her who she was and why she was here. She said, ‘I’m a missionary, and I came to help the Seminoles.’”

Baker told her, “Many of them say that but they always leave. I’ll give you six months.”

Baker’s words were nearly prophetic, because Gladys’ ministry to the Seminoles indeed had a rocky start.

On the recommendation of the Antones, Pastor Joe Billie invited her to help the Brighton people however she could, but he died before Gladys arrived. He had forgotten to inform his successor, Pastor Bill Osceola, of the invitation, so when Gladys showed up, there was some confusion for a time as to who she was and in what capacity she was to serve.

But Gladys’ calling would be fulfilled. Dr. Betty Mae Jumper, Chairperson of the Seminoles in 1967, herself a staunch Christian and also a founder of Chickee Baptist Church, learned of the situation. She invited Gladys to serve on the Hollywood Reservation where there was great need, especially among Seminole youths.

Not only did an enthusiastic Gladys show up, her music and teaching ministries would quickly grow beyond her capacity to handle them. She thought of her old friend, Pepper Harris of Bible college days and invited her to join in this new adventure that would take them not only to Hollywood, but to all the Seminole reservations.

Their work became so intricately intertwined they became known almost as one word: Gladys’N’Pepper. And it still remains difficult for those who knew them to speak of one without speaking of the other.

Judy Baker still laughs when she remembers her “six months” prediction; for not only did Wigden last far longer, she would also lead her to the Lord at the Mekusukey Baptist Church where she attended at the time.

In 2002, as the era of Gladys’ work among the Seminoles finally came to an end, she and Pepper were feted with a surprise party at the Signature Grand Hotel in Davie, Florida.

High profile guests included Chairman of the Tribe and Native American Music Award Winner James Billie who honored the two with a “roast” of their most endearing qualities, and a series of songs.

Poet Moses Jumper, now a Christian, delivered an ode he had written especially for them. He also spoke of how they influenced him away from his belief that the Christian faith was “the White Man’s religion”.

Kathy Antone recapped the years that Gladys traveled and sang with her family, and also honored both missionaries with some of their favorite gospel songs in her distinctive contralto voice.

Many others from around the country also came to pay homage to the work that the two had rendered to the Florida Seminoles. As memories of all their years of service at last condensed into a single moment, the silver-haired “dynamic duo” retired from their ministry. They moved to Penn Yan, New York, to be closer to family and to minister however they could. Harris passed away a few years after her retirement.

On September 1, 2012, Gladys Wigden’s earthly walk also came to an end. She was buried on September 6 at the Rural Cemetery in Prattsburgh, New York.

Friends gathered for a memorial service on September 23 at Italy Naples Baptist Church, Naples, New York, to commemorate her life through hundreds of mostly black and white pictures, “old time gospel music” that she loved, testimonies from those who knew her—and lots of food. 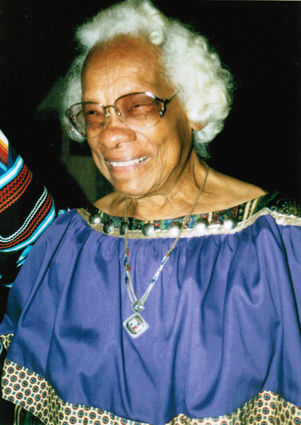 Gladys was recognized as one of the most beloved and highly esteemed non-Indians ever to reside among the Seminoles.

Gladys is survived by two sisters-in-law, dozens of nieces and nephews, and hundreds—perhaps thousands—of friends. All who knew her and Pepper Harris, whether Christian or non-Christian, recognized them as two of the most beloved and highly esteemed non-Indians ever to reside among the Seminoles. y

National Best Books Award and Florida Publishers Association President’s Best Books Award winner KB Schaller (Cherokee/Seminole) journalist, novelist, guest blogger and conference speaker is author of Gray Rainbow Journey and Journey by the Sackcloth Moon (both OakTara). http://www.KBSchaller.com; She is a member of the Native American Journalists Association and other professional writers organizations. You can order Kiki’s books on Amazon.