In the spirit of Crazy Horse, veterans honored 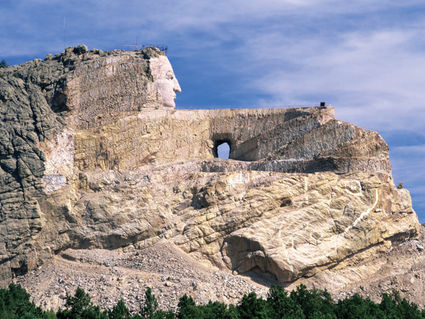 On July 4, horseback riders wrap up the final leg of a six-day trek from the Pine Ridge Reservation to the Crazy Horse Memorial. The ride was held in honor of military veterans, and organizers are hoping to make it a yearly tradition.

Lakota riders from various reservations in South Dakota banded together along with non-Native American riders to honor military veterans during the almost week-long journey.

Pine Ridge, Standing Rock and Cheyenne River reservations were well represented during the 140-mile ride, which kicked off June 29 in Pine Ridge. The Akicita Sungakan Okolakiciye, or Warrior Horse Society, and the Omaka Tokatakiya, or Future Generations, riders collaborated to provide an honoring, which included a roll call from a partial list of people deserving recognition. The list included 64 names.

Oglala Lakota Charles New Holy was one of the organizers of the ride. New Holy often works directly with reservation youth in establishing the traditional ties between the Lakota and their horses.

“It was a hard journey and you know it was grueling, but we made it,” said Jeremiah Young Bull Bear of Kyle, one of the organizers. “We’re a family in a way. It’s those hardships that bond us together. It’s what creates that social connection. They always say those (hard) situations either bring out the best in you or the worst in you, and in this sense it brought out the best in everyone here that rode, in the families and everybody who participated because the one goal was to reach this mountain. We did it with honor, we rode with honor, and we did it for our veterans and for the people who couldn’t be here.”

Crazy Horse Memorial in the Black Hills, or Paha Sapa, was the setting for the July 4 prayer and songs offered in tribute to the fallen Lakota Akicita, the modern-day warriors who served in the armed forces. Jack Cummings, Oglala Lakota, was a well-known veterans’ advocate who always sought to bring the veterans into the public eye for the honoring they deserved. It was through many of his efforts that this event came about.

Cummings passed away in February, missing the event he had put so much work into. However, the honoring that he sought for so many of his fellow Akicita was reflected back into his own honoring during the ride.

In welcoming the group, Crazy Horse Memorial Foundation representative Monique Ziolkowski cited “remarkable” statistics from the U.S. Department of Defense, which report that American Indians have the highest per-capita military representation of any ethnic group.

“My father (Korczak Ziolkowski), who volunteered to serve in World War II at the age of 34, instilled in all of his children the belief that there is no greater honor than service to one’s country. He would be so pleased to have you here today to pay tribute to the loved ones who sacrificed so much in defending our freedom,” said Ziolkowski.

“It’s up to us to remember veterans—everyone—not only on reservations or in Native American circles, but in all circles, in all groups, and races and cultures,” Young Bull Bear said.