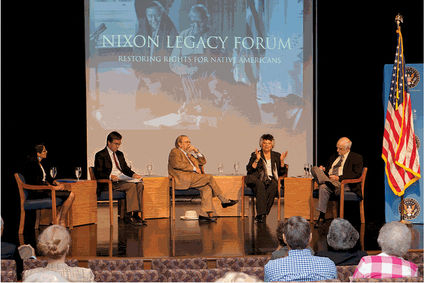 U.S. President Richard M. Nixon played a key part in bringing about Indian Self-Determination. That’s according to panelists in a retrospective forum called “Native American Self-Determination from the Nixon Presidency to the Present Time” hosted by the Gilcrease Museum on May 23.

TULSA, OK—Tribes across the nation have been exercising inherent governmental powers since the 1970s. Nowadays, tribal sovereignty and self-determination are considered a part of everyday business.

But, when did tribes start really using their governmental powers and who helped this government-to-government relationship develop?

He is best remembered for political spying during the Watergate scandals of the early 1970s, but U.S. President Richard M. Nixon and his administration played a key part in bringing about the era of Indian Self-Determination.

That’s according to panelists in a r...