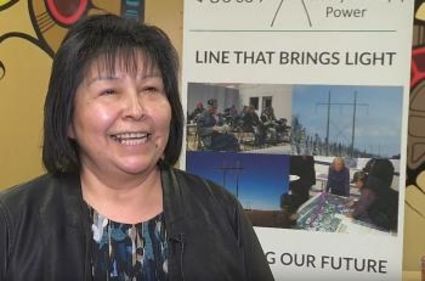 Wataynikaneyap Power, also known as Watay. is a partnership with 51 per cent ownership by 24 northwestern First Nations and 49 per cent by Fortis Inc. Fortis is a utility operator for gas and electricity in North America. For 28 years, the remote area has depended on diesel-generated energy. The project has been actively pursued for the past 12 years, with Pikangikum First Nation becoming the first Watay Power Project community to be connected last year.

The Ontario government announced the approved loan on Oct. 29. That funding will make up the bulk of the $1.9 billion needed for the project.

The work will begin in early 2020 and end in 2023-and the construction phase will provide about 770 jobs. Eventually, approximately 1,800 kilometres of transmission lines will be built to connect the 17 remote First Nations communities and 14,000 people to the Ontario power grid.

"Connecting our remote First Nations to the provincial energy grid will finally end their reliance on expensive and environmentally harmful diesel generation. This will improve the health of our members, and help bring jobs and other economic benefits to our communities," said Nishnawbe Aski Nation Grand Chief Alvin Fiddler, who applauded the work undertaken by Wataynikaneyap Power.

Most remote First Nations communities are running at or near maximum power capacity, which results in load restrictions and power outages, and prohibits new development. Limited diesel power capacity is a major barrier to the development of sufficient, modern housing and community facilities, such as community health and social services.

With the new power grid plans, the communities will be able to pursue economic development, building additional infrastructure and bring more resources to their members. The new plan will also be good for the environment, as diesel generation causes poor air quality and brings risk of diesel fuel spills.