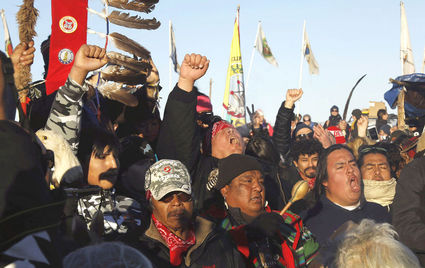 Cheers erupted and fireworks filled the sky over the Standing Rock "water protectors" camps as they celebrated the U.S. Army Corps of Engineers' decision to stop Dakota Access from continuing their pipeline across or under the Missouri River. That was early December. Now we must wait for the results of an investigation by the corps. So the watch continues.

CANNONBALL, ND-When the announcement was made in early December to block the Dakota Access pipeline, it was like an early Christmas gift from the United States government. Celebrations went on for quite some time by those at the protest sites. These included 2,000 U.S. military veterans who had joined the protests on December 2 to protect them from the authorities.

Prior to this there had been confrontations, some of them violent, between tribal protectors and their supporters and law enforcement. Federal officials had given protestors until December 5 to leave the protest site. But on...