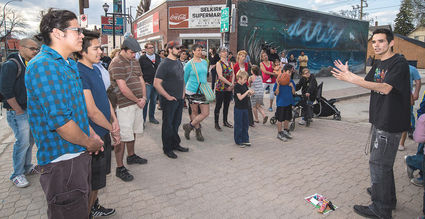 Meet Me at the Bell Tower (MM@BT) founder and spokesman Michael Champagne (top right, right) received the award on behalf of AYO and all those who gather every Friday evening year-round on the corner of Selkirk Avenue and Powers Street in Winnipeg's North End.

WINNIPEG, MB-Manitoba's human rights organizations honored Indigenous youth in Winnipeg's North End who, as a group, are working together to bring about reconciliation.

MM@BT founder and spokesman, Michael Champagne, received the award on behalf of AYO and all those who gathe...