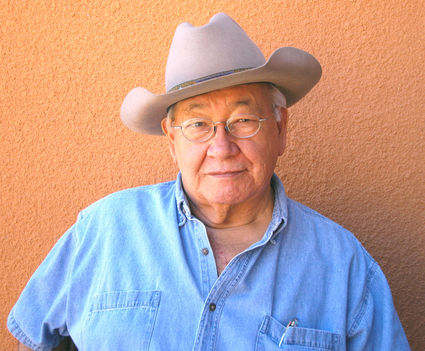 SANTA FE, NM (ANS)-There's only one Native American writer that has ever won the Pulitzer Prize for literature: N. Scott Momaday. He was bestowed America's highest literary honor in 1969 for his book, House Made of Dawn.

Born in 1934 in Lawton, Oklahoma to a writer mother, Natachee, and an artist father, Al, Momaday is Kiowa and Cherokee.

Momaday received his Ph.D. from Stanford University and has received over 20 honorary degrees. Considered by many scholars to be the catalyst for modern Native American literature-the Native American Renaissance, Momaday has influenced countless writers, poets, and artists through his many works.

I've followed Momaday's writings for some time, collecting signed editions of his books of poetry. I even have a signed edition (no, not the first edition) of House Made of Dawn. But I'd never met Mr. Momaday.

For some strange reason, I had likened N. Scott Momaday to Samson Occom (1723-1792), the first Native American to publish writings in the English language: both were "firsts" as Native Americans.

In my mind, Native American writers are some of the unsung heroes of American literature. Largely misunderstood or stereotyped, they offer a unique and important view on American life-one that should be honored and studied. But let me be clear: I'm not too keen on separating people-particularly authors-by race. To me, great literature is great literature, regardless of race, and N. Scott Momaday sits up with some of the finest.

So imagine my surprise when I looked over to a table near my own during a lunch appointment and saw N. Scott Momaday. Mr. Momaday was sitting with two people, chatting about grand things, I'm sure.

I looked at the two people I was meeting with and asked them, "Do you know who that is over there?" waving my head to the table. Sadly, neither did. "That's N. Scott Momaday. He won the Pulitzer in 1969," I continued. They looked at me with a blank glare. "That's an important award given to the finest writers in America." "Cool. That sounds important," one said back.

"Yes, it is. And more importantly, he's sitting nearby. It's not too often that you're in the same room with a Pulitzer Prize winner," I quipped.

"So what are you going to do?" one friend asked. "You should go over there and meet him."

"I don't want to bother him," I replied. "Plus he's with friends." They chided me, but let it drop.

We changed subjects, getting back to the topic of our conversation, eating a New Mexico staple: Huevos Rancheros.

But let me say, one eye-every now and then-looked over at Momaday's table, ensuring that he didn't leave.

After we finished lunch and paid our bill we began to walk out.

And that's when I did it.

I greeted Mr. Momaday, saying how much I appreciated his work, and then recapped the facts concerning his Pulitzer winning book aloud so all would hear.

The friend that was with Mr. Momaday, smiled, making a prayer-like gesture with his hands, a type of "thank you" for noticing the great author.

Mr. Momaday looked up and said "thank you," smiling, as I gently touched his shoulder as a sign of respect.

I didn't say anything back, but smiled, continuing my exit out of the restaurant.

But in my mind, I said, "No, thank you, Mr. Momaday. Thank you for writing, for creating, for inspiring many people-both Native and non-Native; thank you for being a human being that took the time to write words that will continue to give people pleasure for generations to come; words that will stimulate, challenge, and break down barriers and stereotypes."

Until the next Native American writer wins the Pulitzer Prize, N. Scott Momaday will still stand as the first: a force of nature, a commanding and thoughtful mind, one that still inspires.

As Momaday writes in House Made of Dawn, "He couldn't see that he had come to the end of the Truth, and he went on. He tried to make it bigger and better than it was, but instead he only demeaned and encumbered it. He made it soft and big with fat. He was a preacher, and he made a complex sentence of the Truth, two sentences, three, and a paragraph. He made a sermon and theology of the Truth. He imposed his idea of God upon the everlasting Truth. 'In the beginning was the Word....' And that is all there was, and it was enough."

These words translate easily to Momaday himself, "The Word. and that is all there was, and it was enough." 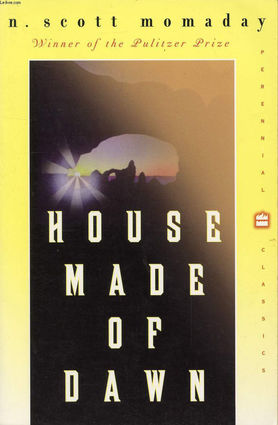 Brian Nixon is a writer, musician, minister, and family man.