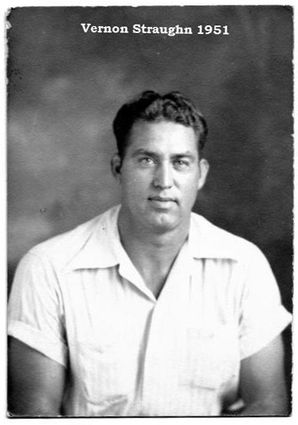 Vernon Straughn was a great man who cared about others and helped them whenever he could.

ENID, Oklahoma-A Chickasaw athlete known for feats of brilliance on softball fields throughout Oklahoma and the nation was inducted into the Oklahoma Amateur Softball Association Hall of Fame on January 25.

The honor bestowed upon Vernon Straughn came 58 years after his death from injuries sustained in a 1955 automobile accident. He was 43 when he died.

Straughn's inclusion in the hall of fame is a "dream come true" for his family, according to Straughn's 72-year-old son, Lance, who has worked tirelessly to bring recognition to his father. Straughn's pitching and hitting skills are legendary among sports writers and softball aficionados.

He once pitched a 19-inning game, fanning 47 batters in a 1-0 shutout while playing in a league in Ard-more, Oklahoma. He took the mound in a national championship game in Cincinnati, Ohio. His son still has his warm-up jacket from that contest, one of few mementos to survive a 1943 house fire.

Straughn could fling a softball an estimated 100 mph. He could hurl a curve ball and a slider. Those pitches are unheard of with the enormous sphere of the softball because both require a rotation of the wrist and a downward "snap" from either the index or middle finger. Additionally, he pitched in an old style "figure 8" rather than the "windmill" motion predominate today.

Lance Straughn estimates his father played in 800 games during his short life. Many times, he played for more than one team at a time.

While Straughn excelled on the softball field, he is just as well known and beloved for his contribution to scouting. He served as a Boy Scout master most of his adult life, according to his son. Straughn's wife, Lillian, was a Cub Scout den mother.

"Kids considered him a second dad," Lance Straughn said. "We always had a lot of kids over at the house. He was a great man who cared about others and helped them whenever he could."