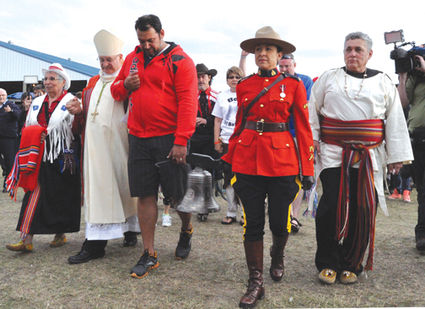 Accompanied by religious leaders and the RCMP, the stolen Bell of Batoche is returned to its home in Batoche, Saskatchewan. Robert Doucette, president of the Métis Nation of Saskatchewan, said that on hearing the bell, he had tears in his eyes.

BATOCHE, SK—The longstanding mystery surrounding the whereabouts of a bell stolen 128 years ago, was explained on July 20, when the man who stole it came forward.

According to the Canadian Press, Billyjo Delaronde, Métis, from Manitoba, told his story as he gave the Bell of Batoche back to the Catholic Diocese of Prince Albert.

The Bell of Batoche was seized from Batoche’s church as a trophy of war by federal troops who put down the Northwest Rebellion of 1885, crushing the dream of Métis leader Louis Riel to build an independent Métis state. It was brought east and eventually ende...