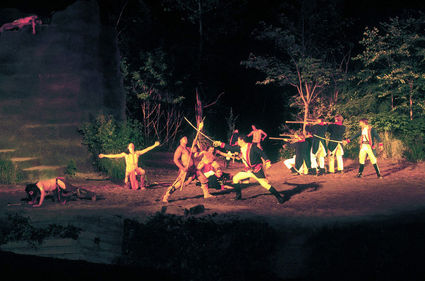 Witness the epic life story of the legendary Shawnee leader as he struggles to unite the various tribes in an effort to drive the encroaching whites from their sacred homelands in the Ohio country during the late 1700s. The huge, outdoor stages of the Sugarloaf Mountain Amphitheatre in Chillicothe, Ohio, afford the audience a unique viewing experience. You will sit beneath the stars in the beautiful Sugarloaf Mountain Amphitheatre as sheer spectacle surrounds you with a herd of galloping horses, live military cannon in action, and the most dazzling battle sequences offered on the American stage.

Tecumseh (/tɛˈkʌmsə/) has become one of the most iconic folk heroes in American and Canadian history, especially with First Nations peoples. Born in March 1768 he became a leader of the Shawnee and a large tribal confederacy (known as Tecumseh's Confederacy) which opposed the United States during Tecumseh's War and the War of 1812.

Tecumseh grew up in what is today Ohio during the American Revolutionary War and the Northwest Indian War, where he was constantly exposed to war. With Americans continuing to encroach on Indian territory after the British gave the Ohio Valley to the new U...