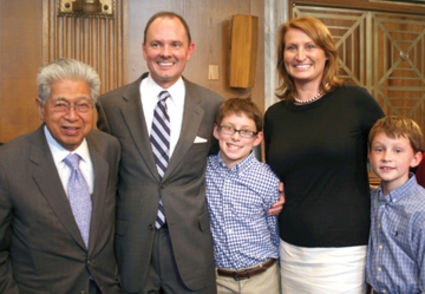 Sen. Daniel Akaka, D-Hawaii, left, with Indian Affairs nominee Kevin Washburn, who was joined at his Senate confirmation hearing by his wife, Elizabeth Rodke Washburn, and their sons, Cole and Ford. Washburn’s mother, Shirley Stark, a single mother who now serves on the Chickasaw Elder’s Council, was in the front row for the hearing.

WASHINGTON, DC— Kevin K. Washburn, a member of the Chickasaw Nation of Oklahoma, was sworn in as Assistant Secretary for Indian Affairs at the Department of the Interior. His position makes him the new head of the Bureau of Indian Affairs. The U.S. Senate confirmed him following his nomination in August by President Barack Obama.

Secretary of the Interior Ken Salazar applauded Washburn stating: “As we continue to strengthen the integrity of the nation’s government-to-government relationship with federally-recognized Indian tribes and empower Native American and Alaska Native communit...