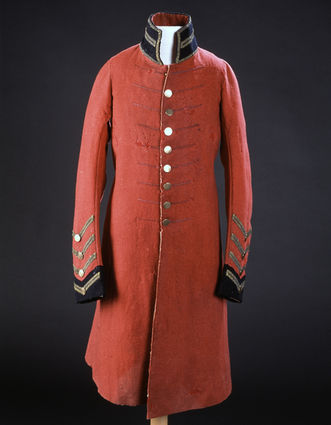 Gift of the Independent Order of Foresters

Chief’s Coat: Red and black wool stroud, gold metallic tape, plain brass buttons, partially lined with linen cloth. Attributed to Chief Oshawana, who would have received it for his services as an ally of the British in the War of 1812.

Housed in only one large display case among a labyrinth of cases, the exhibit is lost way at the back in the Daphne Cockwell Gallery. The case has four parts: two ends and two middles. Seen counterclockwise, the south end starts with Algonquian Christopher Wabie’s metal and plastic sculpture, 1999, of a trailing war bonnet made from old fridge coils. Its black, brooding, satirical elements set the tone for the exhibit by reminding the viewer the war bonnet remains, for whites, the iconic symbol of North American Native identity.

A second feature in the “Living Cultures” section is a diorama installed at the ROM in 1917 and removed in 1970. “Designed to depict pre-contact Mohawk family life,” but now updated, the display invites viewers “to identify the interventions … and to consider the stereotype of an unchanging, isolated indigenous culture portrayed by the earlier version” as seen in a photo.

The diorama depicts, for example, a smiling Mohawk woman in conventional Hollywood film “costume” standing with a camera mounted on tripod aimed at a man standing with a machine gun resting against his leg, and listening to his iPhone. Another man, in deerskin “briefs” and black sweater with “Fluffs & Feathers” printed in white on it, kneels with his right hand holding a primitively made stone axe, and his left hand reaching towards a red plastic electric drill. The diorama is absurdly comical and perhaps directed towards an elementary school level visitor.

A third feature, but in the “Sovereign Allies” section, is a chief’s coat of red and black wool stroud, “attributed to Chief 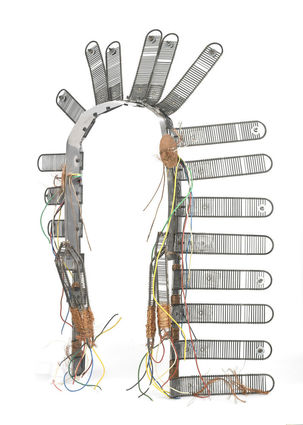 Oshawana, who would have received it for his services as an ally of the British in the War of 1812.” Modeled after the uniform of a British high-ranking officer, the coat is a prime example of acculturation, of the British attempting to make the Native a Brit.

Oshawana in 1848), longhouses, drums, and rattles. Pressing “Jingle Dress” allows the visitor to just hear briefly the sound of metal cones jingling, while “Drums and Rattles” allows, again, only their sound.

Though the exhibit has a jingle dress, with the Native Canadian Centre of Toronto only a few blocks away, Curator Nicks might better have videotaped an actual Native dancer dancing the Jingle Dress dance in time with a real drum.