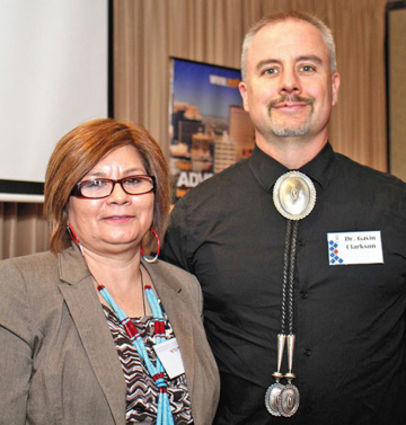 The White House selected Gavin Clarkson, a citizen of the Choctaw Nation, as the Deputy Assistant Secretary for Policy and Economic Development at the Bureau of Indian Affairs. Clarkson has extensive experience in economic development and finance issues in Indian Country. He is a graduate of Harvard Business School and Harvard Law School. With him is Patricia Riggs, economic development director for the Ysleta Del Sur Pueblo.

WASHINGTON, DC-The White House is finally filling out its leadership team at the Bureau of Indian Affairs.

Gavin Clarkson, a citizen of the Choctaw Nation, will be serving as the Deputy Assistant Secretary for Policy and Economic Development at the BIA. He is the first senior political hire at the agency since Secretary Ryan Zinke, the new leader of the Department of the Interior, came on board in March.

The job is not the top political one at the agency. That would be the Assistant Secretary for Indian Affairs, a position that has yet to be filled by President Donald Trump....