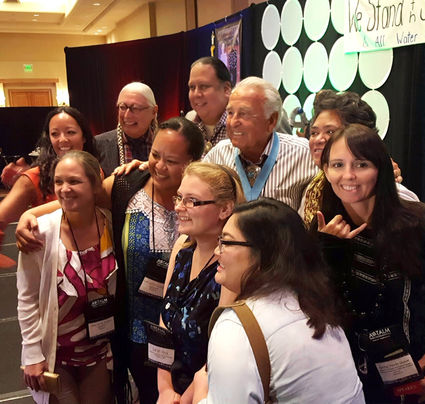 Those from Hawaii gathered for a group photo at the conference.

My name is Storm Stoker, I am the daughter of Crying Wind, columnist for Indian Life, author and life long activist for indigenous people. I was invited to be a guest speaker at the ATALM Conference (Association of Tribal Archives, Libraries and Museums) near Phoenix, Arizona and luckily my mother was able to join me.

The Conference was being held at the Sheraton Wild Horse Pass Resort, which is owned by the Gila River Indian Community. It is a beautiful resort with murals and decor created by the Akimel O'otham (Pima) and PeePosh (Maricopa) people.

ATALM is the largest conference dedicated to professionals who work to support, protect and preserve indigenous cultural heritage through their work in libraries, museums, language programs and historical preservation centers. Over 800 people attended the conference, with 276 nations and 50 tribal nations represented.

The Pima and Maricopa tribes opened the conference with music and dance. Walter Echo-Hawk, the Board Chair of ATALM gave everyone a warm welcome. Timothy Terry, Jr., a storyteller from the Gila River Indian community, entertained everyone with stories from his childhood. His theme was around the idea that Indians didn't have to reject modern technologies to hold on to their traditions.

My own presentation was entitled, "Adding Context to Historical Sites: There's an App for That." I encouraged people to use an augmented reality technology to add context to artifacts, create meaningful tours and add information to marketing materials, documents and books. Technology is a valuable tool that can be used in innovative ways to preserve the past and make a more creative future.

The other speakers on my panel were Kevin Gover, Director of the National Museum of the American Indian, Johnathen Deiss from the Citizen Archivist Project and Dr. Sheri Tatsch from the Indigenous Consulting Services. I was pleased to learn that retired Senator Ben Nighthorse Campbell attended our panel; he is a member of the Council of Chiefs of the Northern Cheyenne Tribe and is a well-known jeweler and former Olympian in Judo.

Sessions at the conference ranged from the cleaning and care of war bonnets to creating oral history projects. My mom and I joined a field trip to the Arizona State Museum, the oldest and largest anthropology museum in the Southwest and were in awe of the beautiful pottery created centuries ago by tribes in the Southwest.

My mother and I felt privileged to be a part of such an important conference and in our free time we spent hours riding horses in the desert. We also spent hours walking in the desert...when we missed our tour bus (I wasn't supposed to mention that)! 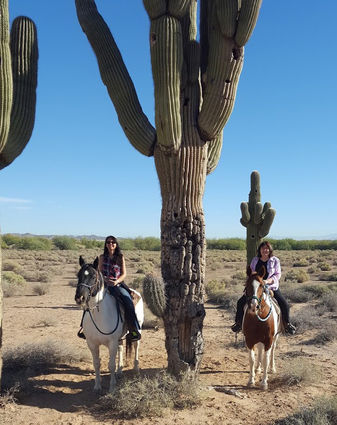 Mom and I took time out to go horseback riding in the Arizona desert. Here are some of the huge cacti we saw.

One of the most touching events was when people gathered to sign a large banner that read, "WE STAND WITH STANDING ROCK." Many are protesting the construction of the 1,172 mile long oil pipeline across the Standing Rock Sioux Reservation in North Dakota. The Pipeline, if constructed, will violate treaties and damage the environment, possibly poisoning the water. The Pima and other tribes in the area were especially concerned because a century ago, in a similar move, the government built dams that blocked the water belonging to the Pima tribe causing drought and famine. The tribe fought for nearly a hundred years to get their water rights back and in 2005 they finally settled their case and regained the rights to the rivers and streams they'd had for a thousand years. To many it feels like history is repeating itself.

The goal of ATALM is to serve the needs of those who work to protect and advance cultural sovereignty and I am honored to be a part of such an honorable professional goal. I plan on spending my career doing what I can to support these goals.

Storm Stoker is the daughter of Crying Wind. Storm lives in Hawai'i and has attended the University of Hawai'i at Mānoa. She has a Library and Information Science (MLIS) degree and specializes in research related to the Pacific Asian region and the Kiowa, Navaho and Kickapoo tribes.