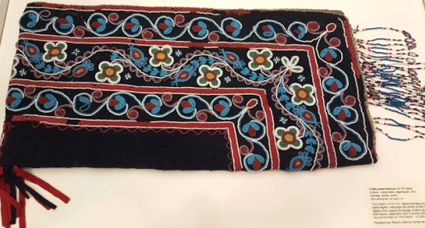 "I am so emotional," said Dinah Simand, the granddaughter of Jane Gunner, when she first saw this rare beaded hood. Gunner was believed to be the original owner of the hood. "It's like meeting my Kookum (grandmother)," Simand said. "This is how I feel when I see it."

OUJE-BOUJOUMOU, QC-A rare and fragile beaded hood that is more than 166 years old made its way back home Monday, finally reunited with the descendants of its original owner in Quebec's James Bay region.

"I am so emotional," said Dinah Simard, the granddaughter of Jane Gunner, believed to be the original owner of the hood.

Jane was the wife of Joseph Gunner, then the chief of Mistassini (now Mistissini).

"It's like meeting my Kookum [grandmother]," she said. "This is how I feel when I see it. My mom told me a story about how my grandmother used to wear the beaded hood on special occasions."

Beaded hoods were once a very important part of Cree culture. They were worn by women for ceremonial purposes, such as changing camps, when an important hunt returned, or for marriages, according to Sarah Pash, executive director of the Aanischaaukamikw Cree Cultural Institute (ACCI) in Oujé-Bougoumou.

"They had a deep ceremonial value and were an important part of [Cree] tradition and community life," Pash said.

"We know that women had to be chosen to be hood bearers... and had very special teachings passed on to them."

Pash said these beaded hoods have not been seen in Cree communities since the late 1800s.

This hood was found by ACCI researchers in the collection of the Montreal-area Musée de Lachine, where it has been for the last 65 years. Before that, it was part of a private collection owned by Fred Russel Hamilton.

When the Lachine museum acquired the hood, in 1948, it was in poor condition.

"It was damaged. Mites had gotten to it," said Dominique Chalifoux, a curator. "We had to get it restored in order to show it."

Trifona Simard, Jane Gunner's great-granddaughter, works at ACCI and was on hand for Monday's ceremony. It was a chance conversation between her and researchers at the institute that helped make the connection.

"My mom started sharing her memories about it, remembering the beaded hood," said Simard. "She had never talked about it with me before."

The hood will be on display at ACCI for the next six months and then studied by ACCI staff for another six months.

Pash said Monday's ceremony was powerful and meaningful for everyone at the institute.

A group poses with the hood after its unveiling at the Cree Cultural Institute in Oujé-Bougoumou. The hood is on loan and will return to the Montreal-area Musée de Lachine next year. (Celina Wapachee/CBC)

"It's really central to the reason why we are there," said Pash. "To make these connections for people. Real people, who are living today, and their children, with our past and our history."

The hood is not being returned permanently, according to Pash, because ACCI, which is the only facility in Cree territory with museum conditions, doesn't have the room to house it permanently. She added that the Musée de Lachine is taking very good care of it.

After the year-long loan, the hood will return to the Musée de Lachine.