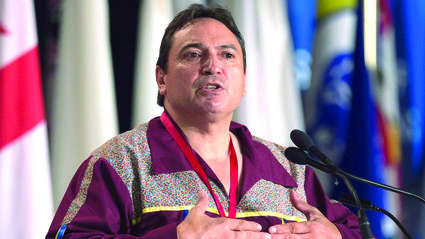 Saskatchewan's regional chief Perry Bellegarde won a decisive majority vote on December 10, 2014, to become the new Grand Chief of the Assembly of First Nations replacing Shawn Atleo. The new chief was praised for his "commitment to the treaties and his willingness to engage both the grassroots and the Canadian government."

WINNIPEG, MB-Saskatchewan's regional chief Perry Bellegarde won a decisive majority vote on December 10, 2014, when he earned support from 63 percent of Canada's chiefs to become the new Grand Chief of the Assembly of First Nations replacing Shawn Atleo who resigned last May over his support for the on-reserve education reform Canada's government was proposing.

With 291 votes, Bellegarde came out ahead of Quebec's Ghislain Picard (136) and Ontario's Leon Jourdain (35).

The winner was praised by chiefs for his "commitment to the treaties and his willingness to engage both the grassroots and the Canadian government."

Belegarde was sworn in not long after the vote count and in his victory speech, he repeatedly asked the members of the Assembly of First Nations to be unified.

"No longer can Canada start promoting policies that are not based on recognition of Aboriginal rights and title," the new national chief said. "For us, it's still unfinished treaty business."

In his speech he had a message for Canadians. "The values of fairness and tolerance, which Canada exports to the world, is a lie when it comes to our people," he said. "Canada is Indian land." He stated that First Nations will oppose any attempt to develop resources, including pipelines, that damage traditional lands unless bands consent and are part of revenue-sharing agreements.

The new chief did commit to continue pushing for a national inquiry into missing and murdered Aboriginal women. He stated he would resist attempts by the federal government to force legislation on First Nations.

Some chiefs question the relevancy of the AFN. Bellegarde is not one of them. "I don't believe the AFN is divided," he told reporters following his speech. "I don't think it is irrelevant."

According to Dan Lett, political columnist for the Winnipeg Free Press, there were fewer candidates running this year and fewer chiefs attended the national convention in Winnipeg. "In 2012, 540 chiefs voted in the election for grand chief. In this election, the number of chiefs and proxies was reduced to 464. That means more than a quarter of the 634 First Nations and bands failed to send their chief or a proxy to participate."

Assembly of Manitoba Chiefs Grand Chief Derek Nepinak did not attend. According to the Free Press, he was..."concerned the organization had lost the moral authority to represent First Nations. He has thrown his considerable and growing national profile behind a rival organization, the Treaty Alliance.