Botswana allowing hundreds of Bushmen to be abused 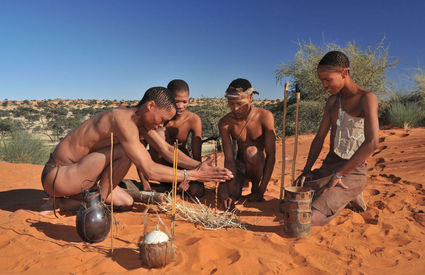 Bushmen were illegally evicted from their ancestral homeland in the Central Kalahari Game Reserve just for being Bushmen. The Botwana government accuses them of "poaching" because they hunt for their food. Here young boys start a fire the ancient way.

CENTRAL KALAHARI GAME RESERVE, BOTSWANA-Hundreds of Bushmen have been beaten, arrested and abused in Botswana according to a recent report from Survival International. The report details over 200 cases of violent abuse recorded between 1992 and 2014, abuses such as a Bushman who died after being tortured; a child shot in the stomach after his father refused police entry to his hut without a warrant; and a Bushman who was buried alive for killing an antelope.

Bushmen were illegally evicted from their ancestral homeland in the Central Kalahari Game Reserve in the name of "conservation"....