River claims man who saved two from its waters 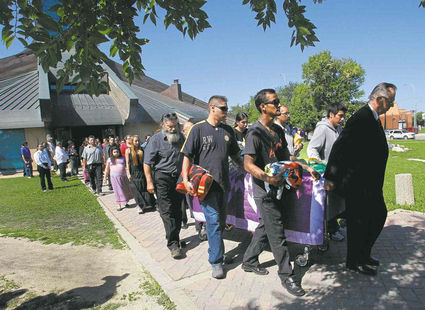 Funeral procession for Faron Hall, the homeless man who became a hero. Tragically, there was no one to rescue him when he needed to be pulled from the Red River.

The body of Faron Hall was found in the same river from which he rescued a teen and rose to national celebrity as Winnipeg's "homeless hero."

He was recovered from the Red River on August 17, police sources confirmed. Foul play is not suspected.

Hall, who was in his late 40s, rose to national prominence in 2009 after he rescued two people from the river in separate incidents, five months apart. His honors included medals, an endowment fund, a room at an expensive hotel, sports tickets, a flood of media coverage and photo opportunities with a string of politicians.

It was a great feel-good...