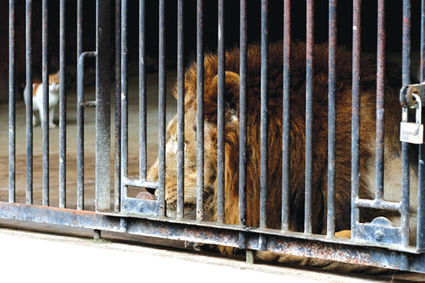 We use our past pain, hurts, brokenness, and self-pity to build sky high cages that trap us in like zoo animals. It’s time to forgive and forget ourselves.

I’m not a prophet. Or the son of one. But once I allowed someone to think I was. Well, allow me to explain...

Ad-seg (the Hole), by law, must give each inmate the opportunity to go outside for exercise. However, in order to do this and yet keep security in place, the yard is no more than a basketball court-sized concrete slab, with 20 zoo-like cages. Four rows of five cages form the solution to the legal requirement. The staff calls them dog runs.

Each cage is perfectly spaced three feet from the next—front, side, back. I like to believe that the person who designed this setup must have once worked at an animal shelter or zoo. Because one sure feels like an animal while in them.

On more than one occasion I had the blessing to be taken out to a zoo cage. Once outside, one can talk openly with anyone in the cages next to yours. It was like zoo animals seeing another of its kind for the first time.

Most of my fellow zoo-caged animal peers knew I was a Christian, so it was never long before someone would ask me some sort of God question. On one occasion, a man I had never seen before started to talk to me. He didn’t waste much time before dropping the God question.

“And that you can do some pretty cool spooky godly things.”

Spooky godly things? Oh, boy! I think I almost tinkled from the laughter. That was the funniest thing I had heard in a long time.

“Who told you that?” I asked him through my laughter.

“One of the guys I talk to through the vent says you know stuff—like stuff no one else knows.” He was serious so I had to compose myself.

“I am not a prophet, nor do I know stuff—especially Godly stuff. But I am a man who is deeply in love and sold out for Christ.” As I said this I could see the disappointment in his face. So I decided to entertain his hope that I was a prophet. “But, if I were a prophet, what difference would it make?”

He opened up like a book on tape and spilled out his life story. He himself was also a believer. By his measure he was not the best Christian, but fairly good. He didn’t read the Bible as much as he wished he could. But he did read it. He didn’t pray every day. But he did pray. He didn’t go to all the chapel services. But he did go twice a week. He didn’t do drugs. But he did smoke every once in a while. He didn’t fight. But he’d been known to have a short fuse.

The reason he was in the hole was similar to why I was there: safety reasons.

He was looking for a prophet so that the prophet could talk to God about an old burden that he had been carrying around for many years. A heavy burden that kept him awake many a night.

He explained how he had been really sorry for what he had done. He had begged God over and over to forgive him for it. But he felt God had not.

“So please talk to God for me. Ask Him if He has forgiven me for what I did.” he concluded.

I wasn’t sure what to say. I wasn’t a prophet nor did I know one. But I think I was now deeper than I intended to be. So I decided to pray.

“Listen, what I want to do is pray for you. Join me and together we will go into God’s throne room and talk to Him. We can do this because of what Christ did for you and me on the cross. Are you okay with this plan?”

The prayer was simple, yet very specific. I simply asked Father to make His grace known in our hearts, so that we could see His love. I begged for His Spirit to be poured upon all the zoo-cages on that yard; on the hearts that openly knew Him, and on all the hearts that did not know Him.

I asked Abba Father to search us and open our eyes to better understand His forgiveness. And lastly, I thanked Him for not forsaking even us in zoo-like cages. I closed in Yeshua’s name.

I opened my eyes and looked at the man across from my cage. He was still praying—eyes closed and mouth moving.

I then looked around to see if the others around me could hear and see what he had just done. To my surprise, the men to my left and right were also praying—eyes closed and mouths moving.

This is going to sound a bit nonspiritual, but it sure looked a bit strange. I did not expect to see the two other men praying, too.

I waited for about 15 seconds in silence. I didn’t know what to do next. But God did.

Almost as if it were a rehearsed story, the two men to my left and right opened their eyes and said in unison, “God doesn’t remember what your burden is all about, and He said you should forget about it, too.”

Once done, both men returned to their zoo-cage exercise as if they had never stopped.

Now that was some Godly spooky stuff. I was a bit weirded out. My thoughts were interrupted when the man looking for a prophet finally finished praying and spoke.

I should forget, too.”

He not only said this once, but over and over, almost like a celebratory chant.

“I’m forgiven...He doesn’t remember...I should forget, too.” He was hopping and fist-pumping. It was a Rocky Eye of the Tiger moment.

He spent the remainder of his time chanting and moving to his rhythm. I never knew his name, nor did I see him again. But I’m pretty sure his burden had been left in that zoo-like cage.

How many times do we lock ourselves in our own cage of unforgiveness—self-unforgiveness? Carrying burdens within us that even God doesn’t remember any more?

We use our past pain, hurts, brokenness, and self-pity to build sky high cages that trap us in like zoo animals. It’s to forgive and forget ourselves. Knocking down the emotional walls that trap us in and steal our freedom and joy.

It’s time to jump around in spiritual freedom, knowing we have been freed and forgiven by Jesus’ sacrifice for us on the cross.

It’s time to fist pump with joy. It’s time to claim it. Say it. Scream it. Chant it. Because God is faithful and just and forgives our sins and purifies us from all unrighteousness.