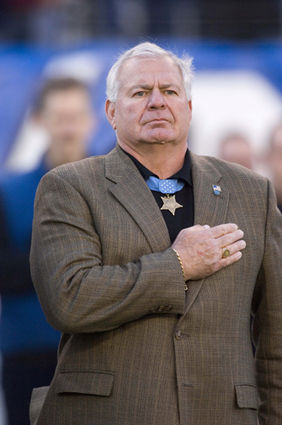 The Medal of Honor Convention

Michael Thornton was awarded the Medal of Honor. The medal was formally presented to him by U.S. President Richard Nixon during a ceremony at the White House on October 15, 1973. The man Thornton rescued, Thomas Norris, survived his wounds and was awarded the Medal of Honor from President Gerald R. Ford in a White House ceremony on March 6, 1976 for his April 1972 rescue of Lt Col Iceal Hambleton and 1st Lt Mark Clark from behind enemy lines. In 1980 Thornton was chosen by Commander Richard Marcinko to be a founding member of SEAL Team Six, the U.S. Navy’s first unit dedicated to counterterrorism.

A Cherokee from South Carolina, Michael E. Thornton’s Cherokee Indians can trace their history back more than one thousand years. Their society was based on hunting, trading, and agriculture, living in towns until they encountered the first Europeans in 1540, when Spanish explorer Hernando de Soto led an exploration through Cherokee Indian territory. By the time European explorers and traders arrived, Cherokee Indian lands covered a large part of what is now the southeastern United States.