By Adapted from CBC files 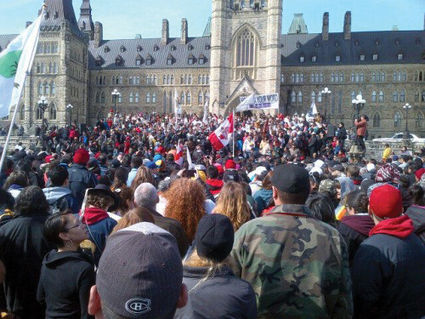 After an almost three-month trek, Cree walkers arrived on Parliament Hill on March 25. “It feels really good, but at the same time I’m really sad that it’s ending,” David Kawapit, 18, one of the original seven walkers said. “A lot of us shared good times here, sad times, but we all stuck together.”

Six youths and a guide left Whapmagoostui in January to snowshoe and walk to Ottawa in support of the Idle No More movement. They called the trek “The Journey of Nishiyuu,” which means “The Journey of the People” in Cree. They arrived on Parliament Hill on March 24.

The group numbered nearly 400 in the trek’s final hours, according to volunteers and Gatineau police, after other children and youth from Cree and Algonquin communities joined them along the way. Thousands more people joined them on Monday afternoon at Parliament Hill as their journey came to an end.