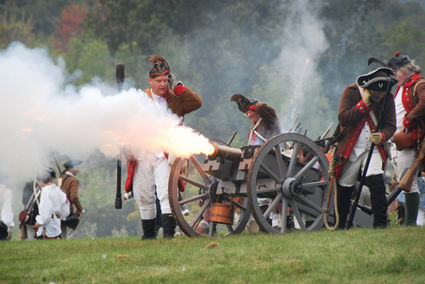 At Akwesasne the victory at Ogdensburg and Crysler’s Farm did nothing to remove the barriers imposed by the war and the border. Thereafter, both British and American authorities would acknowledge only those Mohawks who resided in areas where they claimed jurisdiction. The scars of 1812-1813 would not be allowed to heal but at some time these events should be formally acknowledged as integral to our history. Here is a reenactment of that battle.

Throughout the autumn and winter of 1812-13 the residents of Akwesasne were being drawn into the war between Britain and the US. Since the controversial Seven Nations of Canada treaty of 1796 there had been restrictions on the movement of the Native people living on the “reservation” but the international border had not yet become internally divisive.

Both English and American authorities recognized the importance of the St. Lawrence River as vital to the movement of troops and supplies from the ports of Montreal into the interior. If there was any chance the US could be deterred from invading the provinces of upper and lower Canada the river had to be secured and Akwesasne was the place of greatest vulnerability.

Operating at Akwesasne were agents from both belligerent powers. Colonel Louis Cook, Eleazer Williams and William Gray were firm advocates for the Americans while the British sought recruits. Their efforts were led by Isaac LeClaire of the British Indian Department and Governor George Prevost. Adding to the internal tensions were the refugees from Oswegatchie, those Onondaga-Oneidas driven from their homes in 1806 as the result of the Seven Nations treaty and the political manipulations of Joseph Brant.

The Oswegatchies did not want to return to central New York because of the intense disputes within both nations, divisions which were crippling their efforts to protect their lands from American intrusions and would ultimately cause the Oneidas to move to Wisconsin and Ontario while forcing the Onondagas to relocate to Buffalo Creek alongside the Niagara River in what is now Buffalo.

Added to the blend were those among the Iroquois advocating for neutrality with the preacher Handsome Lake foremost. Many older Iroquois recalled the bitter days of the American Revolution and were well aware of the perils involved in taking sides in these kinds of wars, conflicts in which the Iroquois would be solicited only to be abandoned at its conclusion. Despite this, the majority of the Iroquois living south and east of Niagara-Lake Ontario and the upper St. Lawrence would elect to fight for the Americans while others, those north of the waters and in Ohio, enlisted with the British and Canadians.

The Oswegatchies retained their bitterness towards the Americans. They were given land in the eastern part of Akwesasne but during the war retreated to the islands to protect their families against the wrath of the “American” side Mohawks. The battle at St. Regis, on October 23, 1812 resulted in eight deaths when the Americans struck at the British garrison near the present St. Regis Church.

In retaliation a combined Canadian-Mohawk-British unit led by Captain Andrew Gray attacked French Mills (now Ft. Covington) the next month (November 23), killing a number of US soldiers and capturing supplies. The divisions at Akwesasne were now set and would become solidified over the years.

Up river at Ogdensburg the Americans had established a small garrison while the British did likewise across the St. Lawrence in Prescott. Many of the area residents were closely related across the border and enjoyed the benefits of trade and commerce despite the war. Smuggling goods to whatever side paid best was a way of life along the River, from Clayton to French Mills. The British, with their stronger currency, were fed by American farmers while US soldiers suffered through the cold winter months. When an American officer proposed an attack on enemy ships cruising by Ogdensburg the local militia refused to participate in numbers sufficient to invade the homes of their kin and trading partners in Upper Canada.

The actual battle at Ogdensburg therefore came as a surprise to the Americans. The frozen river has provided a stable and clear parade ground for the British. They were observed carrying out their daily drills by the American soldiers and the local residents.

On February 7, 1813, an American force led by Captain Benjamin Forsyth had crossed the ice and captured 52 prisoners, most of whom were Canadian militia who were paroled to their nearby homes. Governor Prevost was upset by the intrusions and gave Major George MacDonell orders to defend, not attack, against the Americans. MacDonell decided to take the initiative. He would use his 380 troops, plus 30 Oswegatchie-Mohawks and strike against Ogdensburg.

On February 22, the British began their daily drills on the ice. Included were the Glengarry Light Infantry (Scots settlers on lands given to them by the Mohawks north of Akwesasne), a small contingent of Newfoundlanders, over 200 local militia and 120 regular British soldiers. The plan was to have several squads remain hidden then attack the American fort from the west and east while the main force went directly forward. To destroy the US fortifications the British dragged small cannons on sleighs across the ice.

The Americans were enjoying the British drills when, to their surprise, the redcoats charged. The US soldiers managed to fire their own artillery in response but their sights were too high and the British too quick. Within minutes the area was overwhelmed leaving the residents of Ogdensburg at the mercy of the invaders. Forsyth and his men put up a temporary fight but when confronted with a three pronged assault which threatened their only means of escape they did the rational thing and fled into the fields and woods south of the river, leaving 20 dead behind.

The British forces captured 70 American soldiers and a wealth of military supplies. Their casualties were seven dead, 48 wounded. The victors burned the ice bound American river vessels with some homes plundered. The stores were dragged across the ice to Prescott. The fort’s cannons were also carried off to fortify Prescott. Thereafter, the region was secured for the British.

For his leadership and courage Major MacDonell was promoted to Lt. Colonel while Captain Forsyth, despite the loss, was elevated to major. Rather than discipline MacDonell for disobeying his orders Governor Prevost took credit for having won the battle by forces under his command.

A few months later, at the Crysler’s Farm Battle (November 11, 1813) the ability of the British-Canadians-Mohawks to transport men and supplies unimpeded on the St. Lawrence would enable them to inflict an historic defeat on another American army, this one led by General James Wilkinson, despite being outnumbered almost 10 -1. Again, the Mohawks would play a vital part in turning back the US invasion. The territory which would become Canada was thereafter secured because, in part, of the heroism of the Mohawks and their Oswegatchie kin. 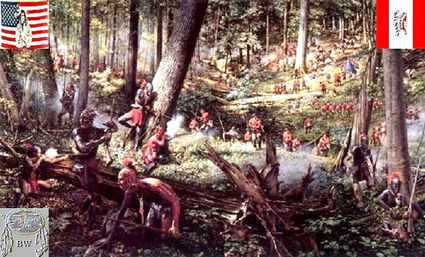 The residents of Akwesasne were being drawn into the war between Britain and the US. Since the controversial Seven Nations of Canada treaty of 1796 there had been restrictions on the movement of the Native people living on the “reservation” but the international border had not yet become internally divisive. The Mohawks played a major role in The War of 1812-13.

The Oswegatchies would have felt great satisfaction in the victory against their old enemies. They would have enjoyed seeing those who had stolen their homes run in disgrace. But they must have also known that after this humiliation the Americans would neither tolerate a return to their lands or provide them with fair and just compensation.

At Akwesasne the victory at Ogdensburg and Crysler’s Farm did nothing to remove the barriers imposed by the war and the border. Thereafter, both British and American authorities would acknowledge only those Mohawks who resided in areas where they claimed jurisdiction. The scars of 1812-1813 would not be allowed to heal but at some time these events should be formally acknowledged as integral to our history.

Doug George-Kanentiio, Akwesasne Mohawk, is a co-founder of the Native American Journalists Association, a former member of the Board of Trustees for the National Museum of the American Indian and the author of many books and articles about Native history and current issues. His latest book is “Iroquois on Fire”. He may be reached via e-mail: Kanentiio@aol.com. Kanentiio resides on Oneida Iroquois Territory in central New York State.