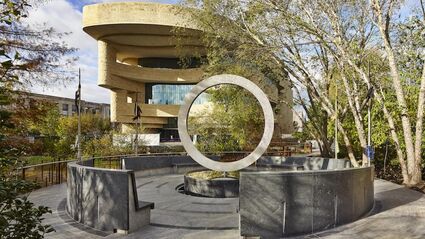 Alan Karchmer for the National Museum of the American Indian

The National Native American Veterans Memorial. On the grounds of the National Museum of the American Indian in Washington, D.C.. Designed by Harvey Pratt (Cheyenne and Arapaho Tribes).

WASHINGTON, D.C.-More than two years after its opening, the Native American Veteran's Memorial in the nation's capital was finally dedicated in mid November, in a ceremony lasting more than three hours.

Tribal leaders and citizens and veterans from across the country marched down the National Mall on Veterans Day to a stage at the foot of the U.S. Capitol Building.

Rex Hailey, a member of the Seminole Nation of Oklahoma and a Gulf War veteran, drove halfway across the country to attend the celebration.

"It's important because it's a once-in-a-lifetime thing being here," Hailey said."This (t...