GARDEN RIVER, Ont.-The Anishinabek Police Service now has a new offering in their line of uniforms. It is reportedly the first law enforcement agency in Ontario to allow police to wear ribbon skirts for events and ceremonies when a police-issued duty belt isn't required.

The skirts presented to officers in a ceremony were skirts handcrafted by Sault Ste. Marie Indian Friendship Centre Executive Director Cathy Syrette. Anishinabek Police Service Chief Jefferey Skye felt it was a special way to honor the Indigenous women who serve their community.

Ribbon skirts are historical and traditional clothing that honor First Nations heritage and help represent causes. They're considered an expression of history, resilience and character. They are not bound by one specific tribe. The skirts go beyond being a focus at ceremonies like powwows, events and funerals. And now they're in everyday use among the police service in Anishinabek. 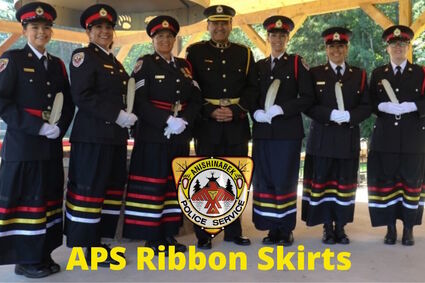 Sergeant Karen Bell, whose police career spans three decades was behind the idea of presenting the skirts to the 12 female officers told reporters from SooToday, "It's been a long-time vision that I had as a long-serving female member working in an Indigenous community, and I felt that we had to somehow recognize and honour all of them." Bell added, "We sacrifice and we know that we were meant to be where we are in our careers, and we chose to make those career moves and those changes and become police officers, and being unique in the fact that we can see our children playing in the communities that we police and being role models for not only our young women, but also our children."

Bell felt that adding the ribbon skirt into the mix of standard uniforms would not only honor the culture, but wuld also introduce the Indigenous culture to some of the First Nations women in the force who were not raised in an Indigenous culture. She feels it helps the officers make more sense of the crime and experiences of those in the culture.

The Anishinabek Police Service has 16 detachments in First Nations across Ontario. A few other police services across Canada have already incorporated the ribbon skirt into their uniforms, including the Blood Tribe Police Service in Alberta and the Lakeshore Police Service in High Prairie, Alberta.