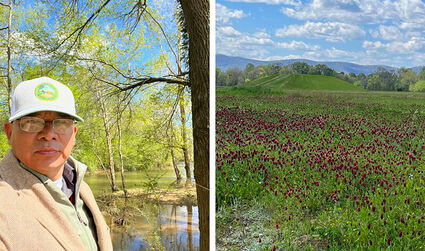 Galen Cloud poses next to a tree on his Muscogee Nation homelands in Oxford, Alabama; At right is a photo of the Arbeka ceremonial grounds in Oxford.

NORMAN, Okla.-Muscogee (Creek) Nation citizen Galen Cloud complained about traffic during the 10-hour drive from Okmulgee, Oklahoma, to his tribe's homeland near Oxford, Alabama-before recalling how his ancestors had to walk that distance against their will.

He was headed to Oxford, where city and tribal officials have worked to protect nearby lands of the Arbeka people, whose ceremonial town was located there pre-re...