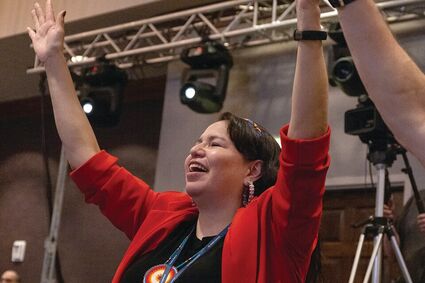 RAPID CITY, N.D.-Native American Christian leaders came together in South Dakota with a powerful focus on sharing Jesus with Indigenous people who've faced generational hardships. The gathering is ahead of the Native Peoples Tour with Will Graham this summer.

They came from Texas and Saskatchewan, South Carolina and Wyoming, Alberta and Kentucky. They carried the names of their tribes with honor: Lumbee, Chippewa, Navajo, Apache, Sioux, Hopi and more.

Altogether, more than 125 Christian leaders representing 14 states, two provinces and 24 tribes gathered for the Native Peoples Christian Leaders Conference in Rapid City, South Dakota. They came to be encouraged and equipped, to worship together and network, all with the goal of seeing revival spread through Indigenous communities in the United States and Canada.

As Will Graham addressed the assembly, he recounted a similar gathering that took place in Albuquerque, New Mexico, on March 18, 1975. During that meeting, Will Graham's grandfather Billy Graham said, "You as evangelical Indians are a sleeping giant. You are now awakening. The original Americans could turn around and be the evangelists to win other Americans to Christ."

For nearly half a century, that statement has been held tightly by Native Christians, a source of encouragement and a challenge to persevere in the faith.

"I believe this is our opportunity-a God-given moment in time," said Will Graham, pointing back to his grandfather's words. "God is waking the Sleeping Giant, and I believe God will use you to bring the last great revival. This is a moment in history that can change our country forever."

A Reason to Hope Despite Generational Struggles and Spiritual Darkness

"I've wept so many tears and cried so many times, like the prophet Jeremiah, weeping for my people," said Craig Smith, an Ojibwe evangelist from northern Minnesota. "Our hearts break for the conditions we find among our people. The challenges, the anguish, and the grief upon grief that cannot seem to be resolved."

The challenges, Smith said, are deep-rooted and endemic. There was no attempt to gloss over this stark reality in the context of the conference, with a myriad struggles addressed head on: loyalty to traditional tribal spirituality, brutality (such as the massacre at Wounded Knee, on nearby Pine Ridge Indian Reservation), forced boarding schools (in the name of Jesus, Native children were taken from their families, stripped of their identities, and treated ruthlessly), alcoholism, generational family trauma and the belief that Christianity is a "white man's religion."

"Evangelism has been among our Native American people for 246 years. That's when the people came to our country and instead of showing the love of God-even though they said, 'Oh, let's evangelize'-their policy was 'Kill the Indian, save the man.' Or 'The only good Indian is a dead Indian,'" acknowledged Reynard Faber, an Apache pastor who serves as Native American Ministry coordinator for Samaritan's Purse.

As he spoke, Faber shared his own struggle of growing up on the reservation, addicted to alcohol and suicidal, before finding a new life in Jesus Christ.

Stories like Faber's-finding redemption in a void of spiritual darkness-show what can happen when the truth of Jesus Christ is proclaimed.

Even in the midst of despair, the speakers and attendees at the conference found reason for hope.

I see Native American verses. I see Native American chapters," said Huron Claus, president of CHIEF (Christian Hope Indian Eskimo Fellowship), referencing the marginalized and broken in Scripture. "I get all excited, and then I realize it is for all nations, all peoples. It's exciting."

Change Is Possible With a Sovereign God

One thing was clear at the Native Peoples Christian Leaders Conference: It's time to be bold in carrying the hope of Jesus to Indigenous people.

"Evangelism is so important. It's not just doing church. It's not. We have broken people from boarding school like me and a whole bunch of others who need somebody to come alongside them or reach out to them," said Faber. "How can we be more intentional about evangelism and reaching out to people in our communities?"

He challenged Native people in the audience to reach their families and spheres of influence. "Evangelism has to come from the Native heart to reach Native Americans. We identify with each other . . . . We speak their language, we speak their culture, we speak what they're familiar with. It's up to us. God has put a big opportunity in front of us." Conference speakers empowered Native Americans to reach their sphere of influence for Christ, saying with their knowledge of Indigenous culture and language, they are best positioned to reach fellow Natives with the Gospel. 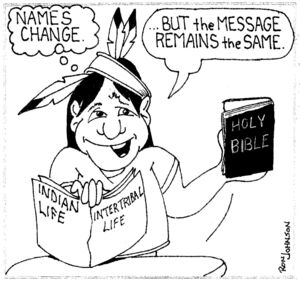 And though the mission field has not always been fruitful, there was a palpable sense that the tide is changing and God is preparing to do something incredible.

"Is it possible after years of hardness to the Gospel, that there could be a divine sovereign move of God that could never, ever be planned in some corporate board room of some ministry organization?" asked Smith. "This is too big of an issue. It's too challenging. Human thought cannot comprehend and figure out a way to solve this. A divine sovereign move of God is needed."

The Sleeping Giant, originally mentioned by Billy Graham in 1975, is an inspiration that has loomed large for Native Christians going back nearly 50 years. They have clung to it like a life raft on a turbulent sea.

"If you've been in Native ministry as long as we have ... there have been many times that Dr. Graham's statement has encouraged us to never stop, never quit, and just continue to be faithful," said Smith. "His words were not only powerful, but rooted firmly in the timeless truths of God's Word."

Many at the conference believe we're about to see a mighty movement of God among Indigenous people that spreads across the country.

"I think we'll look back at this time and think, 'Wow, we got to be a part of that,' because of what will happen perhaps years from now," said Will Graham. "I believe we're going to see Native people on fire for Christ, leading other Native people to Jesus, leading the last great revival. I don't think it will be the preachers leading a revival, but the broken repenting and turning to Christ. I pray this is just the beginning."

The Billy Graham Evangelistic Association will continue to minister to Native groups this summer. In June, a series of evangelistic basketball camps for young people will be held on Pine Ridge Indian Reservation and Rosebud Indian Reservation in South Dakota. July 23–24, Will Graham will visit both reservations to proclaim the hope of Jesus during special one-day events. 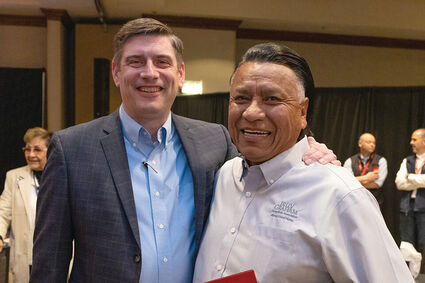 Pastor Reynard Faber, honorary and traditional Chief for the Jicarilla Apache Tribe (right), emphasized the important work that Native Christian leaders have in front of them. "Evangelism has to come from the Native heart to reach Native Americans," said Faber. "We identify with each other ... We speak their language, we speak their culture, we speak what they're familiar with. It's up to us. God has put a big opportunity in front of us."

Used with permission of the Billy Graham Evangelistic Association (BGEA). Visit their website at http://www.billygraham.org.