When The World Turns White

Una was a beautiful Cherokee girl. Her name meant "Remember," and she did remember the smallest details of not only her own life, but the details of those who lived in the green valley that had been the home of the Cherokee since the beginning of time.

Una married a good man and had five children-three boys and two girls. Her daughters were named Woya, which meant "Dove" and Kamama, which meant "Butterfly." They had their mother's beautiful, long hair.

Una grew old. She was blind, her eyesight was gone, and she could only see shadows. She was getting feeble. It was hard for her to walk; she was giving up.

The girls loved their mother, and even though there were streaks of white in their mother's hair, they told her it was as black and shiny as it ever was. They would gently comb her hair and braid it and tell her how beautiful it was.

Una would smile and say that she must still have time to live because she wouldn't die until her hair was snow white.

The children in the tribe would beg her to tell them stories about the animals and why the moon changed its shape and why the leaves on the trees changed color.

And still, every day one of Una's daughters would comb her hair and tell her it was beautiful.

"I thought my hair would be white by now," Una would say, and pat her hair with her wrinkled hands.

"Not yet, Mother," her daughters would say, "Not yet."

Una's daughters didn't tell their mother when her hair was as white as snow.

More time passed and Una was very old, the oldest person in the tribe.

"Surely my hair is the color of snow," she would say, "Surely it is time for me to die."

But her daughters would say, "Not yet, Mother, you can not go until your hair is white."

Una lived to be one hundred years old, when finally, she fell asleep and was gone. 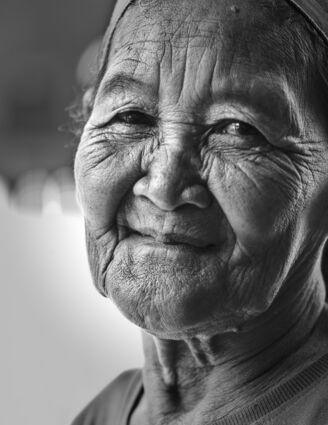 Once there was a woman named Una, which means "Remember" and she had beautiful long, black hair and she told wonderful stories.

Tell your stories; share your memories before your world turns white.

Crying Wind is the author of Crying Wind and My Searching Heart, When the Stars Danced, and Thunder in Our Hearts, Lightning in Our Veins.