How one warrior mobilized to deliver water to the Navajo Nation 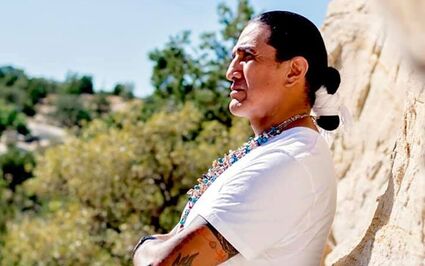 When COVID-19 struck the Navajo Nation last year, Zoel Zohnnie realized elders and others were unable to access water stations. So he purchased a water tank and started hauling water to them.

PHOENIX-Not long after COVID-19 was declared a pandemic in 2020, Zoel Zohnnie was laid off from his pipe welding job. But the Tuba City, Arizona native knew other members of the Navajo Nation were faring far worse.

To mitigate the effects of the pandemic, Zohnnie, 43, launched Water Warriors United, a project to deliver water across the reservation, where an estimated 30 percent of 174,000 residents lack running water and often must travel long distances to haul it back to their homes.

In the past year, Water Warriors United has seen robust crowdfunding and a growing team of volunteers. As of May, the Warriors had delivered 250,000 gallons of water to more than 20 communities on the reservation, which stretches 27,000 square miles across parts of Arizona, New Mexico and Utah.

The Navajo Nation, which has reported more than 31,000 COVID-19 cases and 1,360 deaths, received $1.8 billion as part of the coronavirus stimulus package President Joe Biden signed earlier this year. Part of that funding allows for investments in water, sewer and broadband infrastructure, and Zohnnie and other tribal members are hoping for change, finally, to some persistent problems.

Just a few weeks shy of his initiative's first anniversary, Zohnnie stopped on a delivery trip through the Four Corners region to speak with Cronkite News about his efforts to date-and what's coming next for this grassroots program.

When we last spoke with you, the pandemic was at its height. How did COVID-19 affect the Navajo Nation, and how are residents doing now?

One of the biggest impacts was how many people got sick and died. A lot of family members and people I know came down with it . . . I lost family members, as well. It helps you put things into a better perspective as to why you decided to do it, and why you feel like you should continue, even though the pandemic has lessened. I can't say it's gone away.

How has the Water Warriors campaign grown?

I'm still working off of crowdfunding, donations and help until we can get some grant funding and salaries put together. We're growing at our own speed. Our group is not in a hurry to get to any giant, tremendous, humongous goals. We're just trying to evolve accordingly, keep our head down, stay busy, and just keep getting people help out there. . . .

We've got more trucks, we've got more equipment, we're able to haul more water more efficiently, and we've got better connections with people in certain areas. We've made a pretty decent name for ourselves on the Navajo Nation as an organization that does show up and does get work done and does it safely and does it for the right reasons.

Can you tell us about some of the people you've helped and the challenges they've faced?

We've serviced some homes where arts and crafts and the jewelry that they make and sell to the tourists that pass through for the Grand Canyon or for Monument Valley . . . that's their livelihood, that's how they support their kids and their family. For them not to be able to do that, throughout the pandemic and even now . . . it's hard for a lot of them.

Access to water isn't a new problem on the reservation. How did the pandemic further spotlight this issue?

I think those issues are being addressed on a broader level than they were before the pandemic. Other organizations understood what more people were going through and voiced it to our tribal government. The hard part for me is that the tribal government knew already. . . . But it took a pandemic, it took people dying, it took keeping people home, it took all these things that came up for them to actually say, "Now we hear you."

I'm grateful for it, and I know a lot of people out there are really thankful that changes have been made and are being further made. There's still several things that need to happen. Hopefully as time goes on our group and other groups can all pitch in and make it a little bit better even after the pandemic, not just quit and stop because everything goes "back to normal."

What more should be happening at the government level, whether tribal, state or federal?

The only thing I can express my opinions about is our tribal government, and to me the way that they go back and forth with the money that they're supposed to use to help the reservation, people, it takes forever. Right now, people are out there needing help ASAP.

It's really hard, and I get the politics of it, but as you go further and further up the chain of command, or things get bigger and bigger as far as finances go, it just becomes more about policy and less about humanitarian efforts. . . . Right now I'm going to a guy's home-he can't walk, he's wheelchair bound. He needs a ramp, he needs handrails, he needs water, he needs plumbing. And there's money sitting in the Navajo Nation capital. . . . I don't know where my role is in changing all that. . . . But maybe in time, things will evolve and we'll be more involved hands-on with the processes.

What are some positive changes that have happened?

There have been some new water lines run, some communities that have organized and they now haul water. A lot of other groups and organizations stepped up as well, and got more help out there, because there were a lot of people that went without for a long time.

There've been quite a few people who jumped in and stepped up. Even the people who just take a day and volunteer on their off days from their job. Those hours add up across the whole Navajo Nation for whatever group they're helping. Somebody kicks in 20 bucks and they say, "Oh, that's all I got." That's not the way I look at it. There's no dollar sign on the amount of heart that you contribute.

Have any efforts similar to yours started up since last summer?

There are other nonprofits . . . some nonprofits actually creating jobs, which is what we hope to do. But we just hope for it not to become a job where somebody punches a clock, drops water off, and goes home and doesn't care.

There are people that are trying to organize. I see that more now than last year. People have opened their hearts to attempting to get things together to help those around them. Another thing that came out of the pandemic, in a good way, is that change.

What inspires you to keep this initiative going?

When you are able to go out and help, and you're able to see the parts of your homeland that you never thought you'd get to see, that's a huge factor. But a lot of it also has to do with my career as a pipe welder and a boilermaker. It takes you away for weeks and months on end, and you're putting in 60 hours a week for a boss and a company. After 20 years on the road welding, it's nice to be home, to spend all that time driving on the reservation.

We want to have an organization where we love what we're doing rather than have to crack a whip and say, "All right, well, you didn't get this much done, why not?" Being able to do that every day is almost a dream come true.

What advice would you give others considering an effort like yours?

Figure out how you want to do it, what you want to do, and be honest with everybody about it. When it became more than just me and my truck and a water tank, I brought in an administrative assistant, and that person handles all the money. You've got to be real careful with stuff like that because you never want people to think that you're doing something wrong, otherwise you lose all your credibility.

If you're out there and you want to start something for your community, make it happen. If you can create something that is fully operational, independent, on your own, then you will be able to grow a little bit faster because you'll be developing it the way that you want to.

Trust yourself, be smart. If your heart's in the right place, you'll be just fine.