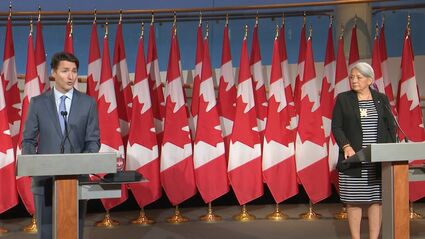 Trudeau announced Mary Simon as the 30th governor general of Canada. Of Inuk heritage, she is the first Indigenous person to serve in this position.

OTTAWA-Inuk leader and former ambassador Mary Simon has been chosen as the next governor general. She is the first Indigenous person ever to be appointed to the role. Prime Minister Justin Trudeau said that the Queen has accepted his recommendation to appoint Simon-a past president of Inuit Tapiriit Kanatami, the national Inuit organization-as the 30th governor general.

Simon is an Inuk from Kuujjuaq, a village in northeastern Quebec. Her mother was Inuk and her father was a white fur trader from Manitoba who worked at a Hudson's Bay Company outpost. Simon, who speaks both English and Inuk...