This is part of the first-ever Indigenous showroom in an Ikea, in Edmonton, Alberta.

EDMONTON, Alb.-An Indigenous design is a new featured look in an IKEA in Canada as an Alberta-based artist has helped IKEA design its first-ever Indigenous showroom.

IKEA is a multinational conglomerate that designs and sells ready-to-assemble furniture, kitchen appliances and home accessories, among other goods and occasionally home services. It has about 450 large warehouse stores in 52 countries. The stores include several floors and feature different showcases featuring various furniture collections.

In December the IKEA in Edmonton partnered with Lance Cardinal to create a showroom exhibit featuring IKEA furniture adorned with cultural Indigenous items from the home of an Alberta couple who are from the Samson Cree Nation and Montana First Nation, in the Maskwacis region.

Cardinal believes the room will help to share culture in a way that is positive and accessible to many.

"The most important thing we want people to feel or understand when they walk through the space is more about who we are as Indigenous people" Cardinal said.

Cardinal, a member of the Bigstone Cree Nation, has worked as an artist in Alberta for over 25 years and has done a large variety of work in the region, including set and prop design, live performances, as well as painting, sculpture and drawing.

Cardinal also partnered with IKEA to design a 40-foot Indigenous-focused mural at the Edmonton store earlier in the year as the store made a conscious recommitment to supporting greater ethnic and racial equity and inclusion in Canada for Black people, Indigenous peoples, and people of color (BIPOC communities). "We care deeply about BIPOC communities and are determined to be a part of real change through meaningful action," they announced.

"I think it's really important to have spaces like this . . . that encourage people to understand Indigenous culture a little bit better," he told Global News. "Nobody has ever taken Indigenous culture and integrated it so beautifully into their space as IKEA has done. And I really hope other spaces look at what they've done here."

You can take a virtual tour of the Indigenous showroom at https://ikea-canada-webca.s3.amazonaws.com/Video/Indigenous-Family-Showcase-Virtual-Tour.mp4 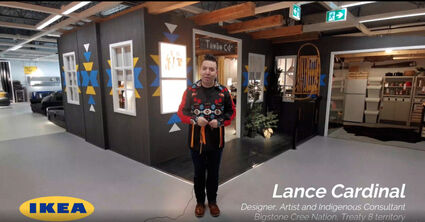 This is part of the first-ever Indigenous showroom in an Ikea, in Edmonton, Alberta.