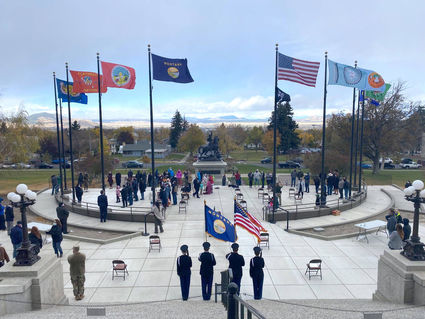 HELENA, MT.-In October, the eight tribes of Montana gathered to celebrate rising of their tribal flags as a permanent display in front of the Montana State Capitol.

The legislation to construct the Tribal Nation Flags Plaza was passed in the early 1990s. However, funding wasn't available until the 2019 Legislative session when Rep. Marvin Weatherwax, Jr. (D-Browning) introduced HB-524 to fund the construction of the Tribal Flag Plaza. It passed both houses of the Legislature with bi-partisan support and signed into law by Gov. Bullock May 23, 2019.

In his dedication statement, Governor Steve Bullock told the attendees that the Tribal Flag Plaza was the culmination of a long hard-fought victory and that the flags will symbolize the resilience of the tribal people of Montana. He also acknowledged the Little Shell Nation, that has long been recognized by the State of Montana but was finally federally recognized last December after more than 100 years of battling for recognition.

"This is a story of optimism and achievement . . . ," Gov. Bullock said. "This is a state house for all people-always for the First Nations. These flags will fly permanently . . . so all can see Montana's commitment when these flags fly together."

"This is an historic day," added Lt. Gov. Cooney. "Eight Tribal Nation flags will fly for the first time with the American and Montana flags. Ten flags all equal, will fly at the same height because these governments are equal to one another."