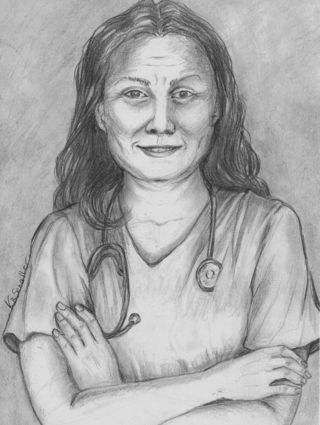 • First woman in her tribe to earn a Medical Doctor degree

Mary DesRosier states that she sees the face of God in her family, friends and neighbors she chooses to serve through Indian Health Services (IHS) on the Blackfeet Reservation, in Browning, Montana-in the shadow of the Rocky Mountains where she grew up.

Interested in medicine since her youth, Mary joined the University of North Dakota's Indians Into Medicine Program after graduating from high school.

Although it was Mary's first time away from Browning and she was "lonesome for home the whole time," she was able to return several times to work at the reservation's hospital. Such times were spiritually uplifting, and there was a peace in heart in knowing that she was doing what she was supposed to do.

After graduating with honors from the University of North Dakota School of Medicine, Mary became the very first woman in the Blackfeet tribe to earn a doctor's degree in medicine. After she completed her residency at St. Joseph's Hospital, Mary returned to the reservation to practice medicine with IHS.

Throughout the rigorous training that studying medicine requires, and in spite of the Blackfeet Indian Reservation's poverty rate of 37 percent compared to the state of Montana's average of 15 percent according to a community health assessment by the Blackfeet Tribal Health Department, Mary never doubted her calling: "I left with the intention of coming back here to work and live," she says. She further states, almost poetically, that, "There's something about these mountains and this wind, and the people, the culture, that makes it hard to live anywhere else."

After earning her degree and returning home, Dr. DesRosier was honored with a new Native American name: Medicine Victory Woman. As such, the Medicare-enrolled family medicine physician would find herself on the front line of an opioid epidemic. Her reservation-based patients also struggle frequently with depression and abuse of other substances which sometimes result in poisoning and liver-related deaths.

Despite the sobering statistics, her patients are shining examples of facing trials with faith and humor. A spiritual as well as medical leader, Dr. DesRosier leads a women's Eucharistic prayer group at Little Flower Parish where she received her first communion.

Dr. DesRosier also chaperones youth ministry trips. She believes that her community's strong Christian faith comes "only through the grace of God."

Despite her demanding schedule, she spends time each morning with Jesus-the source of her faith and strength-before going to work. "I can't do anything without Jesus. He is my springboard, walking with me every day. In difficult situations, His grace just comes in and takes over," she says.

Currently licensed to practice medicine in North Dakota, the board-certified family physician has over 31 years of diverse experience. She is on the American Board of Family Medicine and is affiliated with the Blackfeet Community Hospital, Saint Mary, Montana. Dr. Mary Cecelia DesRosier is also a member of the group practice, U.S. Health, Dept Of Health and Human Services.

Through her unwavering service, she is an inspiration to her community.

KB Schaller is author of 100+ Native American Women Who Changed the World, winner of an International Book Award, Women's Issues Category. Other KB Schaller books are available through amazon.com and other booksellers.