Healing the Heart Through Ultimate Authority 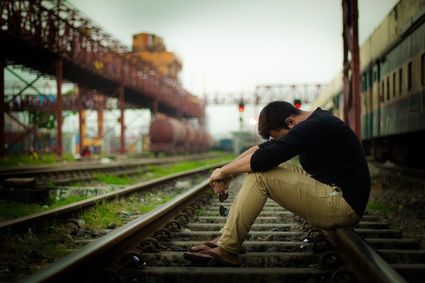 I was part of the Sixties Scoop generation and so although I am Indigenous, I grew up in a different world, compared to my relatives on the reserve. Growing up in the city, we used to have company over to our house on a regular basis-especially on Saturday night. My parents were also part of a church bowling league and so on Saturday night my brother and sister would babysit me and have authority over me for that night.

As I got older, I would go to youth night, where we would spend time together either at the church or someone's house, usually followed by a Bible study of some sort with the youth leader having authority over us for a night. Our parents always knew where we were, because they were the final authority in our lives as parents.

Then we went to church in the morning for Sunday school and then the main service. We would then go home for a nice lunch or go out for lunch to a restaurant. Then after either resting or playing sports with the fellow youth from church, we would, like clockwork, be back at church for the evening service.

Then as I grew older, I would go out for pizza with the fellow youth, who were now driving their own cars. The weekend was a time of adventure with kids from church and our parents always knew what we were up to and who we were with, because they were ultimate authority in our lives. They allowed us to go to these activities but were never too far behind, knowing that other people were given temporary authority over us.

Like a lot of kids, I entered a stage of rebellion. Although I grew up in the church, I didn't want to give God, through Jesus Christ, ultimate authority in my life. I drifted into a desire for drinking, drugs, partying, and doing what I wanted to do. Because I was adopted and from an Indigenous community, I connected with my biological relatives from a community called Alexander First Nation. I soon moved in with an uncle who was a fellow binge drinker and I really enjoyed this environment. Being with my Indigenous uncle wasn't the thing that was wrong; it was that I gave the role of ultimate authority in my life to the world the devil and the flesh.

Ephesians 2: 1–3 says, "As for you, you were dead in your transgressions and sins,2 in which you used to live when you followed the ways of this world [the world] and of the ruler of the kingdom of the air, [the devil] the spirit who is now at work in those who are disobedient.3 All of us also lived among them at one time, gratifying the cravings of our flesh and following its desires and thoughts [the flesh]. Like the rest, we were by nature deserving of wrath." When I was growing up, I didn't have full grasp of what it meant to give God ultimate authority in my life, but the closet thing was the authority of my parents. I didn't always obey them, but I did respect them and obeyed a lot of rules, because I knew they were the authority figures in my life. I also knew there were consequences when the rules were broken.

When I turned 16 a voice seemed to go off inside of me saying, "I am going to start doing what I want, when I want to." Like I said, I grew up going to church and I was used to authority in my family and the church. Yet, because of some unresolved issues in my life, I wanted to break free from all authority. I had a lot of issues with being adopted and my adopted mother dying when I was 12. She had cancer for six long years, and I had to watch her die a slow death. A lot was going on in my conscious sand sub-conscious mind, and I went a bit berserk. I never ended up in prison, other then spending a couple of nights in jail for an unpaid fine and being drunk one night. Yet, everything else seemed to happen to me. I paid the consequences of not wanting authority in my life.

I eventually started to come back to church and turn my life around. It was a long and tough road to recovery and stability. Trying to find out what God wanted me to do with my life, aside from just merely surviving. Yet, I eventually got serious about God the Father, through Jesus Christ being the ultimate authority in my life. My life has never been the same since I made up my heart, and mind, and soul and strength on this matter.

We all can make decisions in our lives, no matter who we are, that don't result in God being our ultimate authority. Sometimes when we make poor decisions, we can even question our own faith. Asking ourselves questions such as, "If I call myself a Christian then why do I keep doing this or that?" Even the Apostle Paul, who wrote Ephesians, and wrote Romans, said that he struggled with making good decisions.

Most of us struggle with making God through Jesus Christ the ultimate authority in our lives. The more we make God the Father, through Jesus Christ, and the power of the Holy Spirit, the ultimate authority in our lives, the more confident we will feel about being on the right track. The Apostle Paul struggled with it, I have struggled with it, and we have probably all struggled with it to different degrees, at various times in our lives, no matter our background or upbringing. Having God as our ultimate form of authority, will help us make wise decisions for the short term and the long term, for our individual lives, and for His Church.

Parry Stelter is a Bible teacher, author and speaker. He is founder of Word of Hope Ministries. If you

are interested in having Parry do a workshop on dealing with grief, loss and trauma, you can contact him at parry@wordofhopeministries.ca.