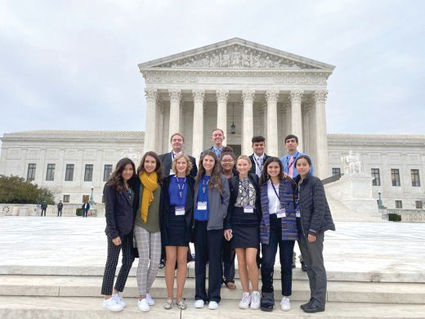 Chickasaw youth recently attended a summit to develop skills and attitudes to become active citizens in their tribes and communities.

During the summit, CPI youth leaders had the opportunity to engage in workshops with others from different tribal communities. They discussed the most pressing issues facing their areas, discovered the historic relationship between tribes and the U.S. government, and explored current issues impacting Indian Country. They also created tribal action initiatives to address concerns and present to tribal leaders, political experts and policymakers.

The Chickasaw Nation CPI youth program provides future leaders with the opportunity to obtain leadership and cultural knowledge through a 10-month, age appropriate project. Business and cultural development courses are offered, along with a variety of community service opportunities.

CPI participants interact with prestigious tribal, state and community leaders, gain hands-on experience in a variety of leadership environments and learn skills to serve as ambassadors in their communities.

Close Up is a nonprofit and non-partisan organization that believes a strong democracy requires active and informed participation by all citizens. The Close Up Foundation seeks to serve young people from all communities and backgrounds, regardless of race, religion, gender, socioeconomic level or academic standing. Since 1971, more than 900,000 students, teachers and parents have participated in Close Up's Washington, D.C.-based programs.

The American Indian and Alaska Native Youth Summit partners with the National Congress of American Indians (NCAI) to allow students to present their ideas and opinions to tribal leaders on important issues facing their communities.

During the six-day summit, First American youth developed the skills and attitudes to become active citizens in their tribes and communities. While exploring Washington, D.C., students observed government officials and tribal leaders firsthand as they advocated for issues impacting Indian Country.