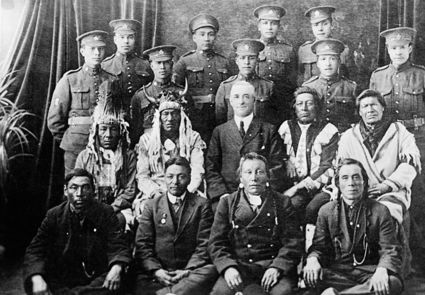 Elders and Indigenous soldiers in the uniform of the Canadian Expeditionary Force during the First World War.

COMOX, B.C.-The Comox Valley Airport has recently installed above its departures lounge a replica of a First World War Nieuport biplane donated by the late Captain David Freeman, a long time pilot and aviation enthusiast as part of the Plane of Reconciliation project.

Freeman's wish was for the 400,000 people who pass through the airport annually to see the plane as a reminder of the contributions and sacrifices of Indigenous Peoples, and all Canadian Veterans, honored through the installation of this plane.

Freeman and a group from across Canada known as Vimy Flight, flew replica Nieupo...