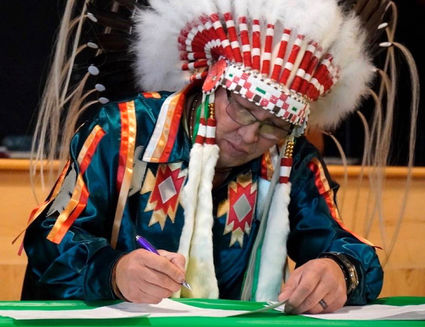 O'Chiese Chief Douglas Beaverbones signs documents enacting bylaws to evict drug dealers from his band's lands, as well as those of the nearby Sunchild First Nation.

Both nations received overwhelming support for the Residency and Trespass Bylaws bylaws after presenting them to their communities for public discussion.

"We are battling an epidemic of drug and alcohol abuse in our communities, " said O'Chiese First Nation's Chief Douglas Beaverbones. "Crime escalated. People are killing each other. There's been shootings. People are running over each other on roads, and there's people breaking into homes, people abusing elders to get money. That's why we had to do something. Both Sunchild and O'Chiese Nations are united and we stand together. This is exactly what we need to ensure our residents are safe. "We're taking control of our communities now. We can fight these drug dealers. We can kick them off the reserve."

The First Nations, both northwest of Rocky Mountain House and including about 3,000 members, will work with the Royal Canadian Mounted Police and the justice system, with penalties and appeals handled by a sanctioned body of seven community members.

The Tribes realize the task may include difficult moments.