Tribes will have objects, human remains repatriated by Finland 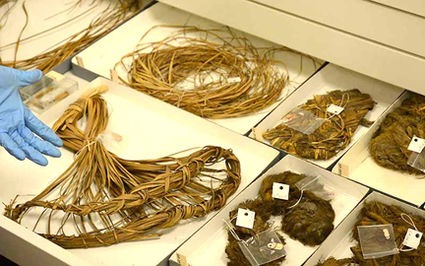 An Arizona State Museum worker points to baskets in the museum's collection in this 2015 photo. These were the types of objects typically found in Native American burial settings, as those items in Finland

WASHINGTON, D.C.-Twenty-six tribes will see the return of ancestral remains from Finland, where the items have been held in a museum after being taken from Colorado almost 130 years ago. Tribes include the Hopi, Navajo, Southern Ute Tribe, Mescalero Apache, tribes of the 19 Pueblos of New Mexico, and others.

The repatriation, announced Wednesday during Finnish President Sauli Niinistö's visit to the White House, follows years of cooperation between the tribes and the National Museum of Finland to identify the objects and link them to specific tribes.