From Addict to Pastor 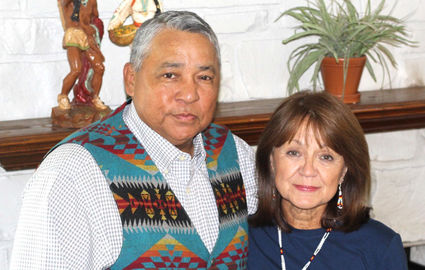 My Native American family of Creek and Cherokee descent was at best a nominal Christian family, but I have fond memories of attending vacation Bible school and going to church on rare occasions as a child.

Although I wasn't taught the Word of God during my formative years, at the age of six I made a profession of faith at the conclusion of a Vacation Bible School-but throughout my teen years, I never felt secure in my relationship to Christ.

As a teen, I fell victim to drugs and alcohol, which caused many heartaches. In spite of that, I graduated from high school and started college seeking a degree in education. In my second year of school, I married my high school sweetheart, Paula. I wanted to have a successful marriage, raise a family and just be happy, but I continued to be my own worst enemy.

Toward the end of that year, a pastor's wife from a small Choctaw Indian church visited our home and shared John 3:16, inserting our names where it stated, "for God so loved the world," to read, "for God so loved Gary and Paula Hawkins." I didn't know of God's unconditional love; I thought that God only loved "good people" and I certainly wasn't among them.

It was hard to believe that such a thing as "unconditional love" existed and that it could apply to me because all I could see about my life was hopelessness, helplessness and someone so undeserving of God's love.

In attending a revival at Little Coweta Indian Baptist, I felt God's Spirit speaking to me on the second night to receive Jesus Christ as my Lord and Savior. At the age of 21, my entire life changed; I felt the weight of the world lifted and true happiness became a reality for me and my wife, who also had placed her faith in Christ.

Pastor Ernest Best mentored me on how to grow daily in my walk with the Lord. Early in my Christian life, he taught me the importance of sharing my faith. I had few Christian friends so I shared Jesus to any who would listen, though many didn't want to hear about my new life in Christ or their need of salvation.

After five years I became a minister of the gospel and served as a youth minister alongside Pastor Best for two years, until he felt the calling of God to enter full-time evangelism to Native Americans in North America, traveling across the country and into Canada and Mexico sharing God's Word. Bro. Ernest was very mission-minded in doing God's kingdom work, and he helped me understand the Great Commission.

When Little Coweta asked me to become their new pastor, I spent much time in prayer before accepting the duty of pastoring my home church. It was quite a learning curve, but I applied my life to the study of God's Word, reliance on the Holy Spirit and prayer. I also learned the value of receiving coaching by some godly men and women of faith.

A few years later I sensed the call to missions among Native Americans. I became aware of needs in Montana through a challenging sermon by Russell Begaye, who at that time served as the national Native American missionary for the Home Mission Board (now North American Mission Board) for the Southern Baptist denomination. I agreed to view the mission field and shortly thereafter agreed to serve in Montana. It was a tremendous culture shock as I moved my family 1,700 miles to a tribe I had little knowledge of and a climate that took quite some adjusting to, but to God's glory Glacier View Baptist Chapel was successfully restarted and the Lord added to the church.

Along with pastoring among the Blackfeet Indians in northwest Montana, I have pastored among the Central Plains tribes of Oklahoma at Shawnee First Indian and the Pueblo Indians in Espanola, N.M. I have been blessed to preach and teach God's Word among indigenous people that I never would have thought possible in Mexico, Canada, Honduras and Australia.

I subsequently served as a church planting missionary jointly with the North American Mission Board and the Baptist General Convention of Oklahoma for nearly 10 years and ministered among the 39 tribes of Oklahoma.

In January 2012, after much prayer I became the first executive director of the newly formed Fellowship of Native American Christians (FoNAC), a faith-based ministry whose primary focus group is Native Americans and First Nations of Canada.

I also serve as the church planting pastor of Native Stone Baptist Church near Tulsa, Okla. Our focus is the pan-Indians of greater Tulsa, which according to 2010 Census encompassed nearly 36,000 Native Americans.

And I serve as the church planting mobilizer with the North American Mission Board for Native Americans, which has become a great partnership. We have space at the Many Faces exhibit at the Southern Baptist Convention, which has provided a tremendous amount of exposure to people. FoNAC holds our annual meeting in conjunction with the SBC annual meeting and we're always open to visitors desiring to attend.

The motivation for my life's journey has been Christ's love for me and for all mankind. All people need a personal relationship with Jesus. I share the Gospel with whoever will listen, but my heart's primary focus is and has been to the unreached and under-reached Native people of North America.

Gary W. Hawkins is executive director of FoNAC, the Fellowship of Native American Christians, and pastor of Native Stone Baptist Church near Tulsa, Okla. This column is adapted from the FoNAC resource, "Jesus Made the Difference: Native men telling their personal story of how Jesus made the difference in their lives." FoNAC, Fellowship of Native American Christians is a Faith-based, Native-led organization. working in partnership with the North American Mission Board of the Southern Baptist Convention, raising Awareness of the spiritual needs of Native people of North America, sharing the uniqueness of Native culture and worldview, networking with ministry partnerships, facilitating the planting of Native congregations and Christian communities.