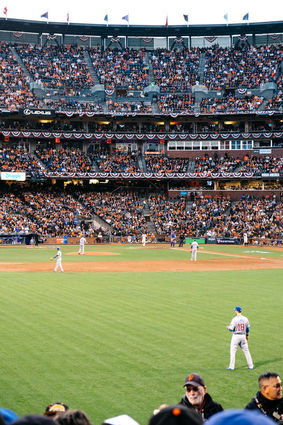 Oh, I know it isn't as fast paced as golf or lawn bowling, but I enjoy the delicate game of cat and mouse between pitcher and batter. The tension of a ninth inning full count with bases loaded.

I enjoy watching the players with their odd quirks and superstitions. Take Wade Boggs, for instance. As a Boston Red Sox third baseman, Wade attributed his stunning success to eating chicken before each game.

Wade didn't stop with chicken though. He took exactly 150 groundballs during infield practice. He always took batting practice and wind sprinting at the same time of day (5:17 and 7:17, respectively) and left his house at the same time on game days.

Then there's Turk Wendell, who wore No. 99, signed a three-year contract for $9,999,999.99 and chewed four pieces of black licorice whenever he pitched. At the end of each inning, he'd spit out the licorice, take a flying leap over the baseline, return to the dugout and brush his teeth. I kid you not.

Kevin Rhomberg played just 41 games with the Cleveland Indians and is best remembered for his peculiar superstition. If someone touched him, he had to touch that person back. If he was tagged out while running the bases, he'd chase down the player who tagged him at the end of the inning. His teammates had fun with it, as you might imagine. One day, fellow pitcher Rick Sutcliffe reached under a bathroom stall and touched Rhomberg on the toe, sending the poor guy into a frenzy that resulted in him tagging everyone in the clubhouse. Rhomberg also refused to make right turns, because baserunners are always turning left. While driving, if he was forced to make a right turn, he'd do so by making a complete circle to the left.

I'm not making any of this up.

How about you? Are you superstitious? Do you forward chain emails for fear of what might happen if you don't? Do you knock on wood, cross your fingers and avoid cracked sidewalks and the number 13?

How about your spiritual life? I used to think that if I just prayed enough, read the Bible enough, had enough faith God would owe me; it would be smooth sailing. But God is not a vending machine. We can't push the right buttons and get what we want. Life is not problem-free. Trials come that we might grow, that we might find God and find that He's all we need.

I like Eugene Peterson's take on Colossians 2:8 in The Message: "You don't need a telescope, a microscope, or a horoscope to realize the fullness of Christ, and the emptiness of the universe without Him. When you come to Him, that fullness comes together for you, too. His power extends over everything."

So today, I invite you to trust Him. Whether you're driving or flying or playing baseball. Go in His strength and His power alone. Remember what He said to Israel through the prophet Jeremiah: "I know the plans I have for you, declares the Lord. They are plans for peace and not disaster, plans to give you a future filled with hope."

God is entirely trustworthy on Friday the 13th or on a Saturday in June when we accidently walk beneath a ladder and trip over a black cat.